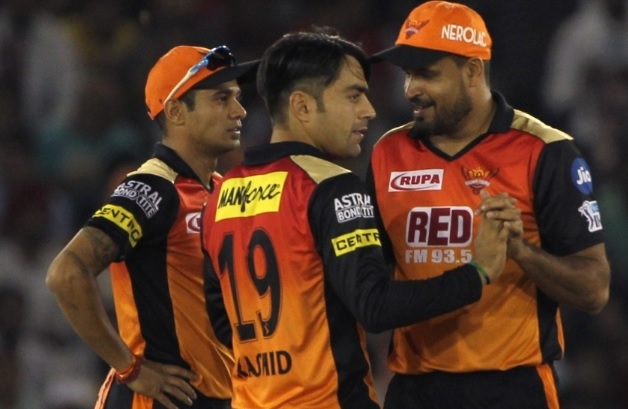 Rashid on Friday plundered an unbeaten 10-ball 34 towards the end of Sunrisers’ innings to help them get out of a hole and score 174/7.

Eventually those extra runs proved to be the difference as KKR could manage 160/9 in 20 overs. Rashid returned spectacular figures of 3/19 in four overs.

“He is a good cricketer and in Big Bash and other overseas tournaments, he has batted well, hit fours and sixes. He has the ability to bat and that is why he bats at number 8. Against Chennai (Super Kings) also he hit a couple of sixes. So we don’t doubt his ability and were not surprised,” Pathan said at the post match press conference.

Heaping praise on the 19-year Afghanistan spinner, Pathan said Rashid has been consistently doing well for the team in crunch situations.

“He batted and bowled really well, and when the team needed that he delivered. He deserves credit for performing consistently well throughout the season. We have seen him bowl well but today we saw him bat well too.

The team benefited from that and we reached the final.”

Rashid was also behind the run out of Nitish Rana and took two catches to cap an all-round performance.

Sunrisers will now take on M.S. Dhoni’s Chennai in the final in Mumbai on Sunday.

“Chennai are a good side that’s why they are in the final, same applies for us. On Sunday, whoever plays better cricket will come out winners. We want to continue the good work,” Yusuf said.

Sunrisers snapped a four-game losing streak to beat KKR by 14 runs. Asked what prompted the turnaround, Pathan said they were always consistent which showed in the points table (Sunrisers finished top of the table).

“We all trust in our abilities. The cricket we had played at the start, we wanted to continue that. Even after losing four matches, we were in pole position. We won important games in league stage so got the cushion.”

Pathan has had a subdued IPL by his big-hitting standards. But the 35-year old sounded unfazed saying the team management is pleased with his performance.

“If you look at games and how we have won our matches, hitting sixes is always not needed.

“We have to see what the team needs and how to play out 20 overs. Maybe sixes are not coming from my bat, but whatever I have played the team is benefiting from that. I am happy with the way I am batting and my coaching staff and skipper is also pleased.”