No re-exam for Class 10: Government 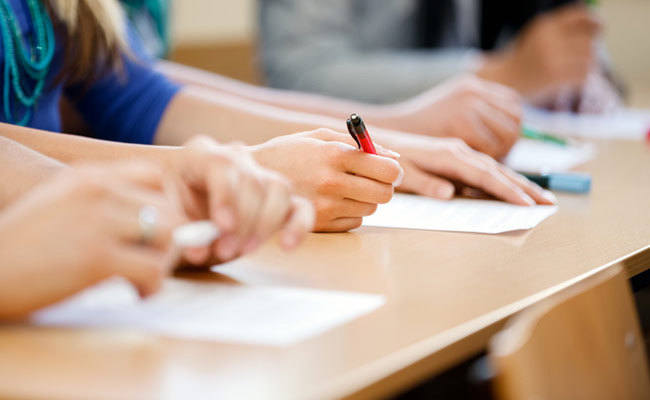 The CBSE Class 10 mathematics re-exam has been scrapped, HRD Secretary Anil Swarup tweeted. The tweet said that the CBSE has decided to not conduct the re-exam after evaluating the impact of the leaked paper and keeping in mind the best interests of the students. Earlier, the board had decided to conduct the re-exam only in the states of Delhi NCR and Haryana. However, Swarup made it clear in his tweet that there won't be any re-test in those two states too.

Following the CBSE paper leak, the board had announced that the test centres would from now on receive an encrypted copy of the question papers on e-mail which they would need to download and print themselves.

As a result, CBSE exams in several centres in Delhi started late as they found it difficult to follow the new "leak-proof" system put in place. According to ToI report, that the new method comes with 'technical glitches' that would inevitably delay the exams.

Delhi Police Crime Branch on Monday questioned the principal of the school, whose two teachers were arrested for their alleged role in CBSE paper leak.

The police found that the teachers allegedly opened the papers 30 minutes before the exam, clicked photos and forwarded the same to the coaching institute owner.

Delhi Police are suspecting that the CBSE question papers might have been leaked from neighbouring Haryana, a senior official said.

Earlier, Delhi High Court on Monday asked the Central Board of Secondary Education (CBSE) if they have any plan to re-conduct the class 10 Mathematics examination. The bench asked the CBSE to mention a tentative date and not to keep the students on "tenterhooks" till then.

Delhi High Court also asked the Central Board of Secondary Education (CBSE) and the Centre to file reply on a plea seeking a court-monitored investigation into the paper leak case.

Earlier, the Supreme Court on Monday agreed to hear a batch of petitions against the Central Board of Secondary Education (CBSE) decision to re-conduct the mathematics exam for Class 10 students after the question papers the first time were leaked on March 28. A Bench headed by Chief Justice Dipak Misra agreed to hear the case for an urgent hearing on Wednesday.

Earlier, the All India Parents Association seeked for a court-monitored probe into the CBSE paper leak through a PIL.

The SC hearing will also consider the petitioners' plea for an investigation into the leaks and declaration of results on the basis of exams already conducted, according to news agency IANS.

The three accused were on Sunday arrested from Delhi's outskirts in connection with the paper leak two of them teachers and one the owner of a coaching centre.

There might be more reasons for concern as the police have uncovered the modus operandi that could have been replicated for papers of more subjects during the board exams. The school authorities of Mother Khajani Convent have been questioned and the police are looking for leads, according to a PTI report.

The arrested teachers have been identified as Rishabh and Rohit. They are teachers of mathematics and physics, respectively, at Mother Khazani Convent School at Bawana. The coaching institute owner goes by the name Tauqeer.

The CBSE paper leak of Class 10 maths and Class 12 economics question papers has affected hundreds and thousands of students across India.