Connect Gujarat
#Beyond Just News
More
Home India Nita and Mukesh Ambani celebrate their son’s wedding with the protectors of... 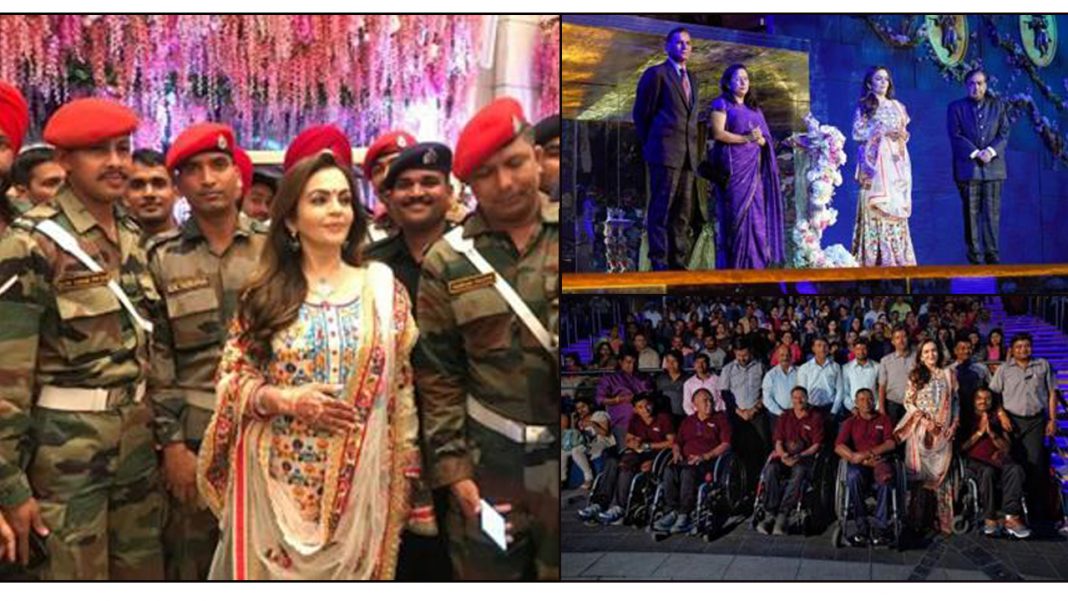 As an expression of gratitude and respect for the people who make the city and nation safe, Nita and Mukesh Ambani today celebrated their son’s  wedding with thousands of members of Army, Navy, Paramilitary Forces, Mumbai Police, Railway Protection Force and their families. They seek their blessings for their son Akash’s wedding with Shloka.

The highlight of the celebrations was a special Musical Fountain show called Ananta Prem at the Dhirubhai Ambani Square which is conceptualised by Nita Ambani set on the theme of Krishna’s Raas Lila to symbolise an eternal love story. Speaking at the occasion, Nita Ambani said, “We feel delighted and honoured that the protectors of this city and the nation are joining us in our celebrations. It’s an emotional and joyous occasion for us and we hope these heroes, who make us proud everyday, will shower their blessings on Akash and Shloka.”

Nita and Mukesh Ambani are celebrating Akash and Shloka’s wedding with not just family and friends but also with under privileged children, residents of orphanages and old age homes, members and families of the forces, city workers and employees as part of the wedding celebrations and to seek their blessings.

Nita Ambani said, “We as a family very much identify with the city’s socio-cultural fabric and have deep respect and gratitude for the people who make it function, particularly our police, armed forces and city workers. It is at once humbling and immensely satisfying for us that we can share our joy with this great city, to which we owe everything.”

The celebrations were held at the newly opened Dhirubhai Ambani Square in Mumbai’s BKC district, which is dedicated to the city of Mumbai.