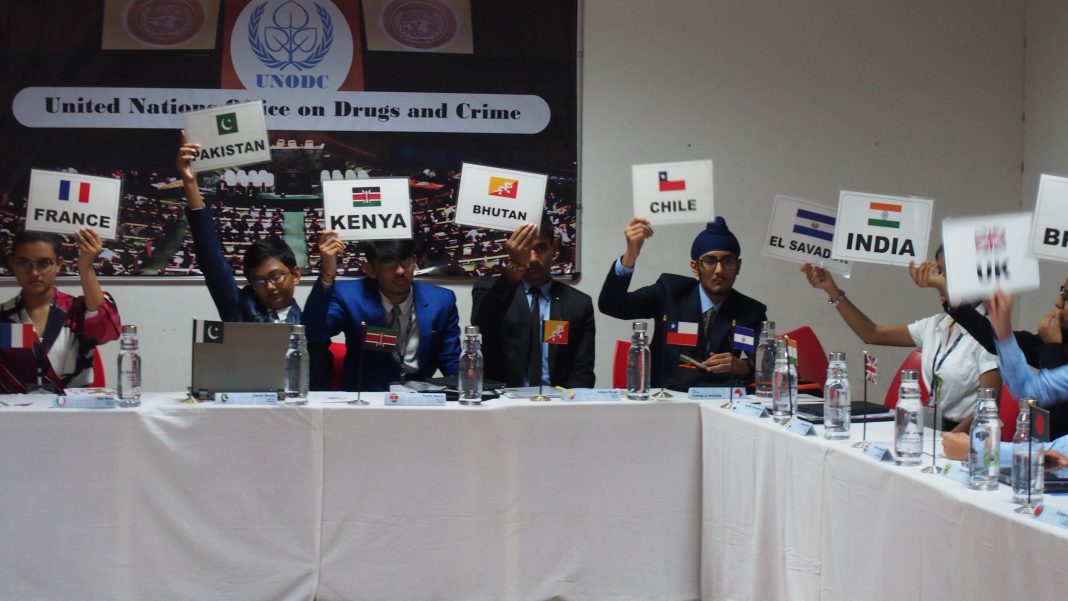 The 8th edition of the Navrachana International Model United Nations (NIMUN) saw participation of more than 200 student delegates. Students from 20 schools in Gujarat and the neighbouring states as well as a school from Sweden actively participated in the simulation of United Nations sessions.
The focus this year was “In pursuit of a Humane World” and students debated, negotiated, caucused, drafted and voted on resolutions that address world problems. NIMUN 8 was inaugurated by Lt Gen Sumer Singh , AVSM and his presence was inspirational and motivational for the students.
The student Chairs and Co-chairs of the several UN bodies work tirelessly in planning to conduct this student-lead, premier inter-school activity on the school premises. Initiated by the Navrachana International School in 2010 for the first time in this part of Gujarat, several schools in the city have also started organizing their own Model United Nations as a valuable learning and personality-building exercise for their students.
Maintaining NIMUN 8’s maxim- “In Pursuit of a Humane World”- the agendas focused on various matters of contention, current and relevant, aimed at nurturing the communication of ideas, critical thinking and problem solving abilities of  young minds.
The various committees in simulation are the United Nations Security Council [UNSC],  United Nations Disarmament and Internal Security Conference [DISEC],  Economic and Financial Committee[ECOFIN], United Nations Office on Drugs and Crime[UNODC], United Nations Historic Security Council [UNHSC], Special Political and Decolonization Committee [SPECPOL], all of which are linked through the efforts of  the International Press Corps [IPC].
At the end the students were awarded for the Best Delegates, Position Papers, Delegations, and the Chair’s Commendation will be declared to encourage the deserving delegates.
Georg Sparshchuh, CEO, Schott Glass India, presided over the concluding session on September 1.