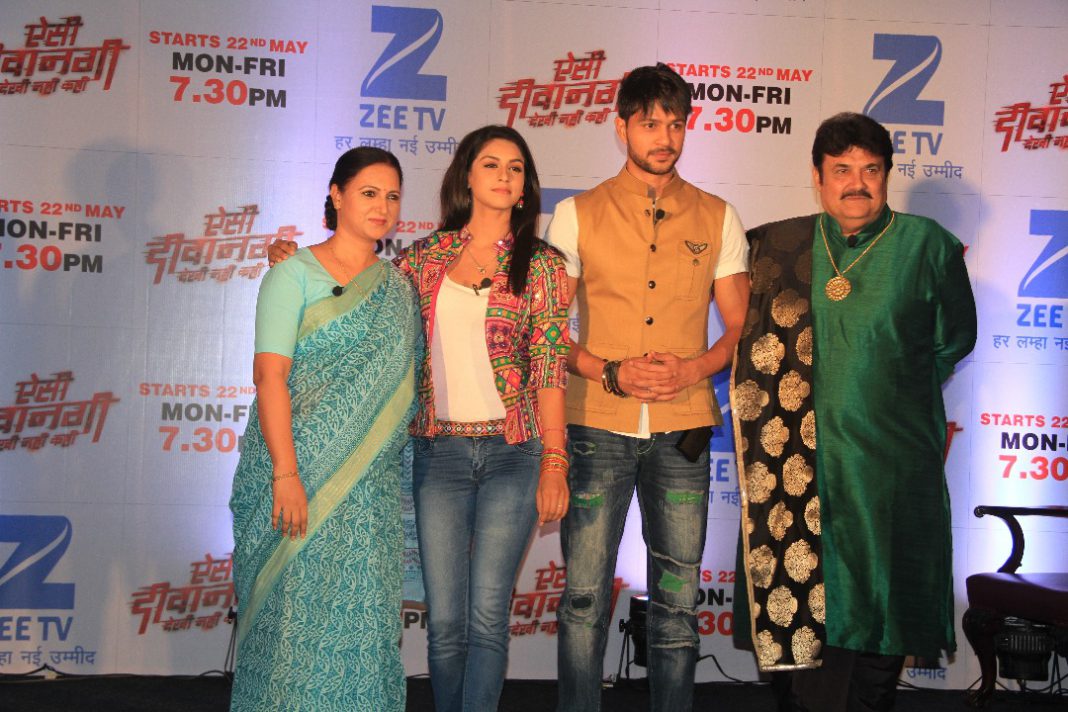 A new action packed love story based in Gujarat is going to hit the small screen this month which promised to give the viewers a new experience in terms of story line. The lead actors were in Vadodara on Tuesday to promote the show and shared their views of shooting in Gujarat and the hospitality.

Aisi Deewangi…Dekhi Nahi Kahin the latest offering on Zee Tv is an action-packed love story of two youngsters whose dynamics are more likely to develop into intense hatred rather than love. Based in the hinterlands of Gujarat, the story focuses on Tejaswani and Prem, but the center of all the drama is Dharam Singh Rathod, Prem’s father and a dreaded don of yesteryears.

Tejaswani and Prem are poles apart in personality and come from diverse family backgrounds. With Tejaswini’s father being an honest, upright, martyred cop, nothing between her and Prem could even be faintly similar. It is circumstances that result in them fiercely locking horns.

The show will feature veteran Gujarati theatre and film actor Rasik Dave playing the character of Dharam Singh Rathod. The characters of Tejaswini and Prem is played by debutants Jyoti Sharma and Pranav Misshra.

Rasik Dave from Vadodara said that the show presents something new which turns him to accept the offer. “I do little television as I have my own production house and also doing theatre. I now concentrate on quality based roles which gives you something to act and the same is there in this series. The character I play has lots of scope and that is the reason I accept the role. First time I play the character of don which has different shades,” said Dave.

The two debutants are really happy to get their first break which has different shades to play. “I play the character of a independent girl who is honest and never see anything wrong. The serial is my first break and I must say its the dream role to start with. The strongest role to portray with various shades is what i like in my character in the serial. After 6 years of struggle it’s the dream break and the USP of the show is every character has his own identity and one can relate with,” said Jyoti Sharma.

Pranav Misshra who wants to do unpredictable loves the character he plays in the series. “I hail from Rajasthan so is Jyoti Sharma who play the character of Tejaswini in the serial. The first thing I told her that we both are from same place and we have to do good role. We shared the good of screen chemistry which helps us onscreen. Earlier I visit Gujarat and done a film on Akshardham temple in 2015 and this is my first break which is a strong role,” said Pranav.

Pranav learned Gujarati for his character in the serial based in Rajpipla. “I watched Gujarati films and shows on Youtube and try to understand the language and how to speak with the accent. Whenever I was at the shooting I always taking the help of Rasik Sir as he is from Gujarat and asked him about how to speak particular lines. Whenever they are not around I took the help of college students and crowd,” said Pranav.