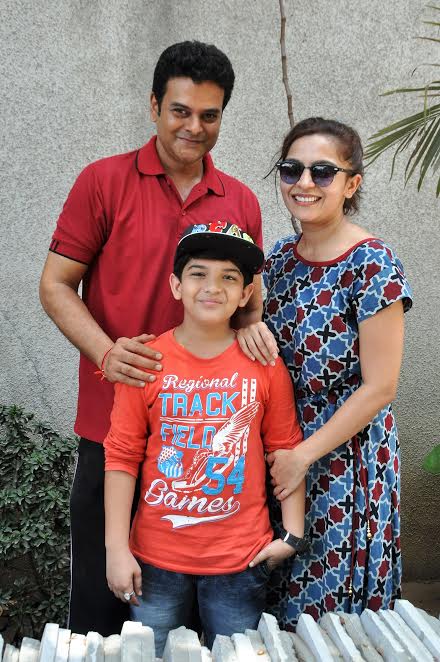 The film is education based story revolving around a student which gives a social message to the parents. “Couple of years ago there is a time when Gujarati films rule the Gujarati film industry with directors coming out with new subjects. However in the last one year the films didn’t do well as the scripts are almost same like the stories of brothers and friends. We came up with a different story in the film which relates to the audience as it is based on education and gives a message how to treat your children and the best way to educate them,” said Kirtan Patel Director of the film.

Veteran theatre actors Dharmendra Gohil, Ami Trivedi plays the lead role in the film along with child actor Krish Chauhan. The makers of the film chose various locations to shoot and also designed a modular set for the film. “The story of the film is different and will plan to release it post Diwali. We designed a movable set inside a house which is first of its kind in the Gujarati film industry. Apart from that we will shoot the film in different locations like Nareshwar, Shivrajpur, Pavagadh and Kandari in and around Vadodara. The shooting of 40% of the film will be in Vadodara and we are using VFX, movable set and latest Hollywood like technology in the film with an estimated budget of 1.72 crores,” said Patel.

Actors Dharmendra Gohil and Ami Trivedi are excited to sign the film which gives a social message specially to the parents to educate their kids. This is the third film signed by Dharmendra Gohil who is impressed by the storyline of the film. “This is my third Gujarati film and the earlier two are having different subjects. This one is a family entertainment where the film gives a message to the parents to understand their children and don’t pressurize them for studies. Similarly the film also has the message for the children also,” said Gohil. Ami Trivedi a well knowm Television actress is excited after signing her first Gujarati film. “It’s almost more than a decade that I signed my first film alongside Ritesh Deshmukh and Genelia. After that I turned myself to television and done popular shows like Papad Pol, Khichdi, Sajan Re Jhhoth Mat Bolo. The story of the film excites me as it’s something new and beautifully written which we can relate ourselves with,” saidTtrivedi.

Both the lead actors are veterans in the theatre field and hence find it not at all necessary for the actors. As per Ami Trivedi she is doing it for the last 20 years and learned a lot about acting and performance on stage and from the seniors. She said theatre gives you live response instantly also lots of understanding. However the television gives you a broader canvas.

Dharmedra Gohil said that theatre gives you the sense of responsibility and moulds you as an actor. It also makes you disciplined and active in your work. However both the actor agreed on the thing that theatre is important but not necessary for an actor. The passion for acting inside him or her is what keeps them going.