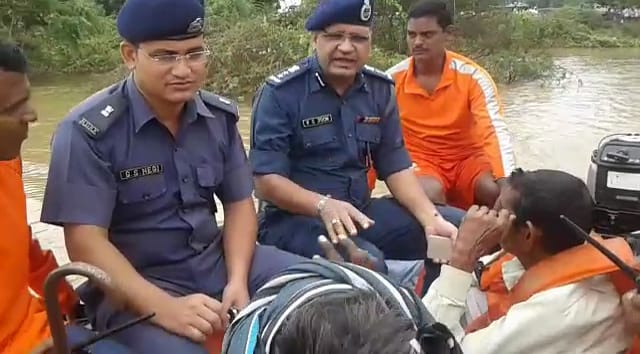 16 teams of NDRF deployed in the flood affected areas in Gujarat and till date rescued 596 people and shifted them to safer places. The team also rescued a person with snake bite last night by qualified medical team in Navsari. They also shifted four bodies from different areas died due to floods.

Saurashtra and South Gujarat is worst affected due to heavy rainfall in the state which forced the people move to safer places. NDRF teams were deployed in the worst affected areas and involved in rescue 596 people till today. They also provide food packets and other relief materials to the people and constantly monitoring the situation under the supervision of Commandant R.S. Joon.

Commandant R.S. Joon having more than 10 years of response  experience in natural and all technological disasters which includes Utrakhand disaster and Jammu and Kashmir supervise all the relief work here in Gujarat. He received decorations from govt of India and also from govt of Gujarat too during floods in 2015 and 2017.

“He has a team of expert and dedicated officers which saves precious lives and property during such natural disasters. The NDRF teams respond in quick time to such situations and save lives, preserve property, livestocks and most important maintain the confidence among the people of affected areas,” said Mishra.

We often witness such situations in other countries also where they use latest mechanism and machinery to help in the rescue works. The machines which can purify water, mud in the disaster prone areas and help the rescuers to complete the work in quick time. Such machines can be a great help to the disaster management teams in India.