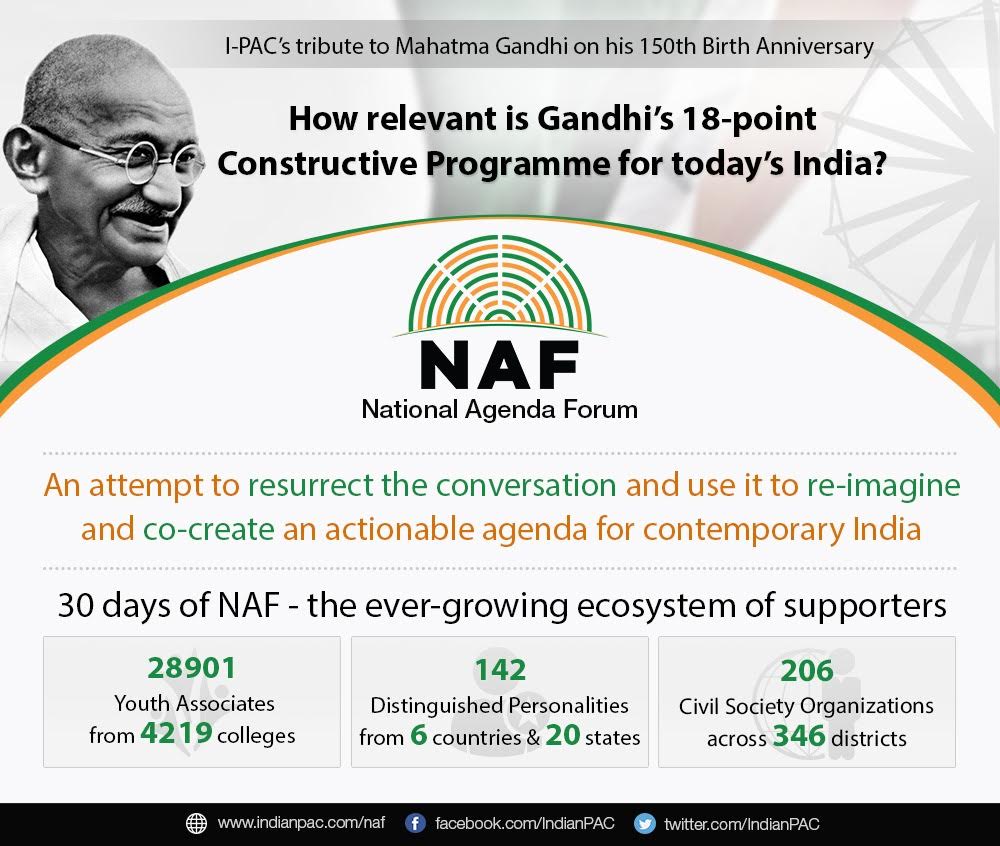 Within 30 days of its launch, the National Agenda Forum (NAF) received good support from all across the country. So far 28,901 youth associates, 142 distinguished personalities and 206 civil society organizations have joined the forum.

Indian Political Action Committee (I-PAC) launched the NAF on 29th June 2018 as a tribute to Mahatma Gandhi on his 150th birth anniversary year. It’s a pan-India initiative to resurrect the conversation around Gandhiji’s 18-point Constructive Programme and use it to re-imagine and co-create India’s priorities to formulate an actionable agenda for contemporary India.

Till date 28,901 youth associates from 4,219 colleges, 142 distinguished personalities from 6 countries and 20 states, and 206 civil society organizations spread across 346 districts have joined the forum. The support comes from diverse group of people and organisations like Gandhians, Gandhian organisations, recipients of civil honours, eminent public servants, sports and film personalities.

I-PAC is a group of young professionals who have driven the election campaigns for Narendra Modi in 2014, Nitish Kumar in Bihar (2015), Captain Amarinder Singh in Punjab and Rahul Gandhi in UP during (2017).

The initiative NAF they launched is a platform for citizens to augment their stakes in participatory democracy and decide the political discourse of India. People can register and vote to choose the agenda for the General Election (2019), and select the leader they think will be best suited to deliver on the chosen agenda. The voting has already started and will remain open till 14th August 2018. The results will be announced on 15th August.

The next general election will coincide with Mahatma Gandhi’s 150th birth year and they dedicated the NAF to Mahatma Gandhi and his 18-point constructive programme, outlining the top priorities to be undertaken by an independent India. Taking inspiration from his sempiternal constructive programme they want to reimagine and co-create India’s priorities to formulate an actionable agenda for our present and our future.

Over the next couple of weeks, I-PAC plans to reach out to students in 750 colleges and 320 civil society organizations across 21 states, during our field visits.

The voting is still open; citizens can continue to become a part of NAF by logging on to http://www.indianpac.com/naf/ and voting on the agenda and the leader.