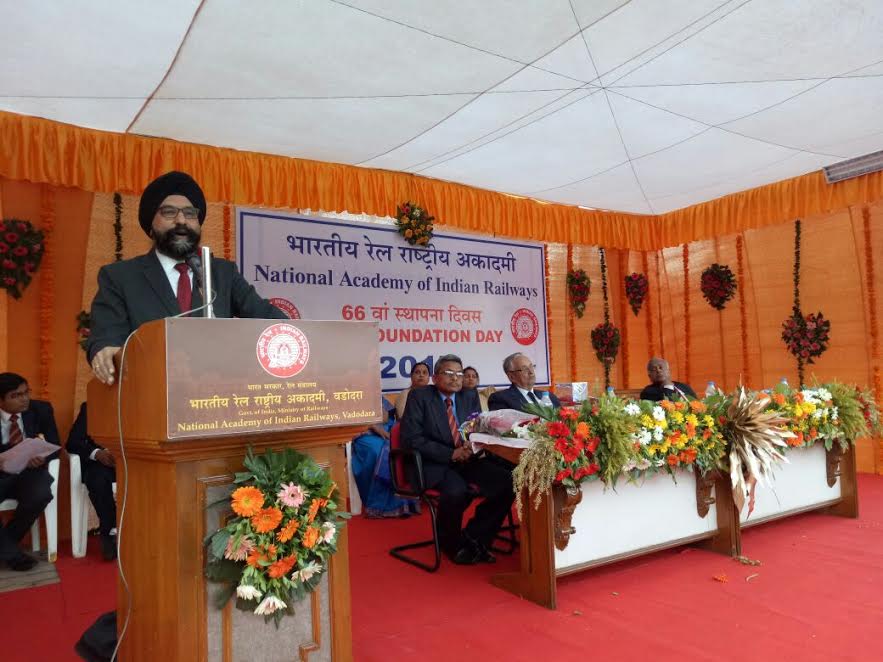 During the Foundation Day function, ‘Distinguished Alumnus Award’ for the year 2016 has been presented to Vinoo Narain Mathur, an officer of Indian Railway Traffic Service (IRTS), retired Member (Traffic), Railway Board & ex-officio Secretary to the Govt. of India. Various medals and trophies were presented to the 38 Railway officers and many other staff, who displayed their outstanding performances in various training programmes and other activities during the year 2016. This included prestigious Director General's (DG) medals presented to 22 officers. NAIR, formerly Railway Staff College, which was initially founded in 1930 at Premnagar, Dehradun, was then shifted to its present regal sylvan surroundings at Lalbaug, Vadodara in 1952, and housed in the Pratap Vilas Palace, built in 1914 AD by the Gaikwads (erstwhile rulers) of Vadodara. Having been set up at its present location on 31st January, 1952, the Academy is celebrating its 66th Foundation Day this year. The academy has excellent facilities in terms of Classroom environment, rich Library, Computers, Sports grounds & courts, Hostel, and Mess etc. for the trainees and other guest officers. The facilities are being further expanded for providing world class infrastructure in the academy.

After the function, a cultural programme was also organized by the Probationers of ongoing Group ‘A’ Foundation programme.