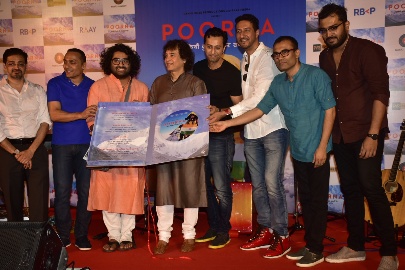 Rahul Bose’s upcoming biopic ‘Poorna’ had its music launch in the presence of the musical maestro, Ustad Zakir Hussain, who was invited as the chief guest. The event took place in a suburban theatre in Mumbai and had an interesting line-up of live performances.

Ustad Zakir Hussain had worked as a music director for Rahul Bose’s directorial debut, ‘Everybody Says I’m Fine,’ and the project also had Salim Merchant work closely with the maestro. The trio has shared a good bond since then and Salim-Sulaiman were roped in to compose music for ‘Poorna.’  The duo who are known for creating soulful music, were seen performing live at the launch. Salim shares, ‘It’s been a great journey doing the music for this film. Almost as great as Poorna’s! Sulaiman and I have explored different genres but with the same intent – memorable melodies that evoke great emotion combined with unforgettable lyrics.”

Sulaiman says, ‘When Rahul asked us to compose the music for the film we were so moved by the story that we immediately said yes. It is not often that you get to compose songs for a movie so inspirational.” Arijit Singh, who has sung two songs in ‘Poorna’ called ‘Kuch Parbat Hilayein’ and ‘Babul Mora’ was present to entertain everyone. He spoke about how the film’s trailer is really inspiring and he wants everyone to go and watch the film.

He shares, ‘I was so moved by both the songs Salim-Sulaiman have composed and Amitabh Bhattacharya has written for ‘Poorna’, that singing then came effortlessly. The emotions of this film drive the songs. Singing them was pure pleasure!’ ‘Kuch Parbat Hilayein’ was a part of the film’s trailer and is already tugging at heart strings for its motivational and inspiring composition. The live rendition of the song by the team created a soul-stirring atmosphere. Ustad Zakir Hussain too joined them on stage for an impromptu performance!

Raj Pandit, who is a protegee of Ustad Zakir Hussain, has also had a long association with Salim-Sulaiman. He has sung for the album and wowed everyone with his live performance at the launch. Rahul Bose showcased the video of ‘Kuch Parbat Hilayein’ and then addressed the media for an interesting round of Q&A, sharing his experience about directing, producing and acting in the film.

When asked about the music album he shares, ‘I have admired Salim-Sulaiman’s work for over a decade now. I wanted soulful, emotional, inspirational music for ‘Poorna’. They were the perfect choice. To have a great lyricist like Amitabh Bhattacharya on board was ‘sone pe suhaagaa’. And just listen to Arijit! He’s taken the music to another dimension with his singing. Zakir bhai composed the music for my first film, ‘Everybody Says I’m Fine!’, and to have him with us – I am over the moon!’ The event was concluded with a surprise for Salim Merchant as it was his birthday and he celebrated it with the entire team by cutting a cake.