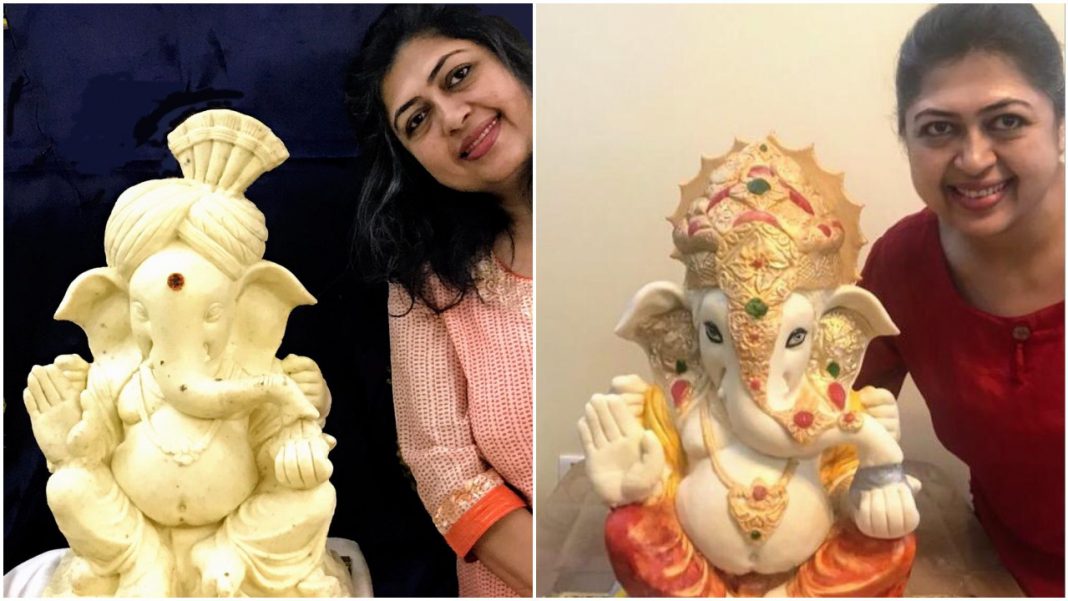 Ganeshotsav is known for its splendor as well as the perfect platform to spread the social messages to the devotees. Every year the artists with their unique ideas put their heart in designing the idols carrying a special message for the people.

One such artist from from Gujarat this year presented her new invention the Kheer Ganesha. Originally from Rajkot the Mumbai-based artist Rintu Kalyani Rathod presented her new invention of Kheer Ganesha this Ganeshotsav. Earlier she gives chocolate Ganesha to people and present a new concept before the world. She completed her graduation in fine arts, post graduation in journalism and Mass Communications from Vadodara and lives in Mumbai for the last 21 years now.

“After giving Chocolate Ganesha to the world 8 years ago it’s time to present my new invention Kheer Ganesha before the people. I was working for the last 9 months to develop a formula to make Ganesha in ancient Indian way. Termed as Amrit, Kheer has been served in our temples as prasadam since time immemorial. The Idol is loaded with dry fruits, milk powder, broken rice, sugar, elaichi, saffron and is Pure, divine and blissful. Just like my Chocolate Ganesha, immersion in milk results in Kheer Prasadam. The idol is dedicated to the well being of our future generations,” said Rathod owner of Rini Bakes and founder of the Food Army.

For the last 9 years Rintu tries to prepare something unique during the festival. First time it was from sugar and almond paste followed by the chocolate Ganesha. The artist concept remains the same where the Visarjan is done in milk and then the chocolate milk was distributed to the underprivileged kids as Prasad. Started in 2011 she taught more than 1000 people on how to make Ganpati idol from Chocolate.

Rintu Rathod, who has come a long way from not knowing how to make tea till she got married to now becoming a world renowned Chocolate sculptor and baker with many awards and accolades to her credit.

“The idea of Chocolate Ganesha came into existence when i saw the beaches filled with rotting flowers, accessories and Ganesh idols broken in parts scattered around after Ganesh Visarjan. Being a Ganesha devotee and an environmentally conscious person I decided to do something and thought about an idea which was not only Eco-friendly but humanity friendly as well,” said Rathod.

Since 2011 she makes Ganesha Idols from chocolate and immerses them in milk. The chocolate milk then distributed to the underprivileged kids as prasad.  Her idea has been widely appreciated worldwide and today hundreds of people are following in her footsteps. She now teaches the art of Chocolate Ganesha making to others too.

This year she made Kheer Ganesha loaded with dry fruits, milk powder, broken rice, sugar, elaichi, saffron. The idol is 2 ft tall and weighs 25 kg. Just like her Chocolate Ganeshas, immersion will be in milk and will result in Kheer Prasadam.

Rintu an artist and make life size cake and chocolate sculptures. Her medium of work is confectionery- chocolates and cakes.

Besides the Ganeshas, she is also known as the founder of the Food Army. The group is committed to reach out to the victims of any natural calamity with home cooked food mainly Theplas. They also provide first aid kits, medicines, clothes etc to the victims. All these without involving any money. She has received many awards for her Food Army work as well.