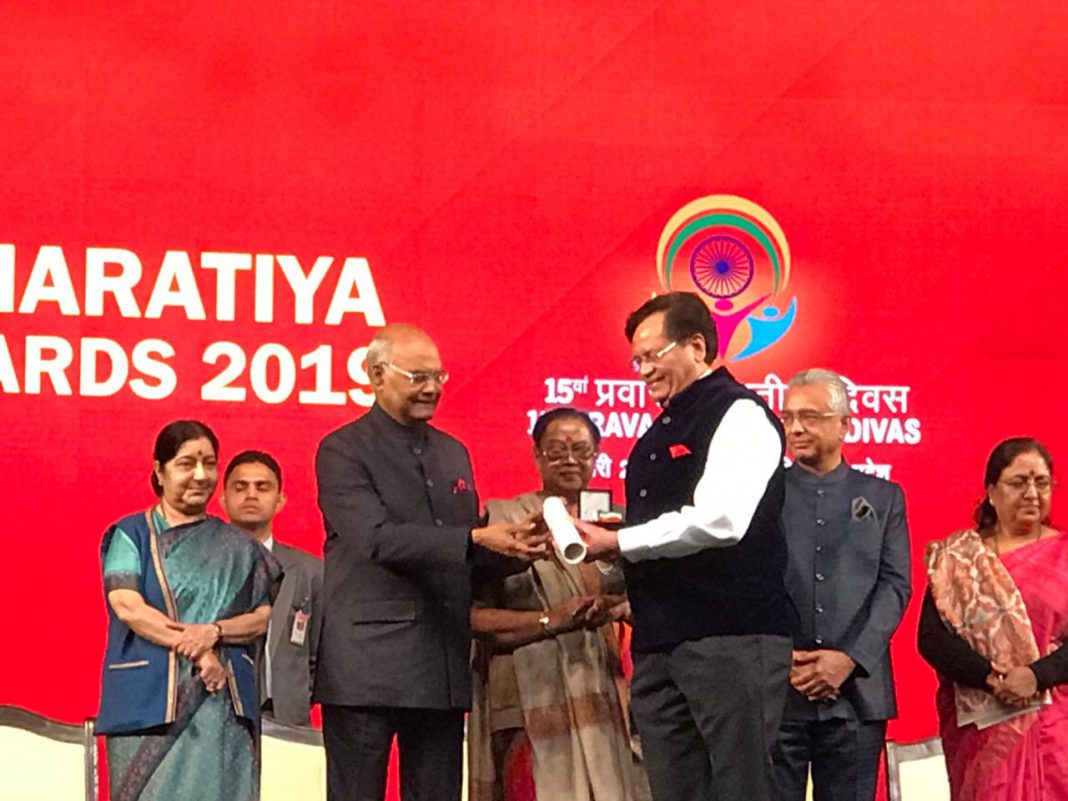 Presented by President of India, Ram Nath Kovind in Varanasi on January 23, 2019

Gitesh Desai is awarded the Pravasi Bharatiya Samman Award for 2019 – the highest honor conferred on overseas Indians by the Government of India. The prestigious award was presented by President of India, Shri Ram Nath Kovind in Varanasi on January 23, 2019.

Originally from Jambusar Gitesh Desai is a graduate in Civil Engineering of 1975 batch from the M.S. university of Baroda. Currently, he is working as a structural engineering consultant with over thirty-five years of experience in engineering and construction projects worth up to $12 Billion with prominent American companies.

Gitesh Desai served as president of Indian American Political Action Committee of Greater Houston (IAPAC). During his tenure as president of IAPAC, he led a delegation to Capitol Hill in Washington, D.C. lobbying for accountably and transparency for the US financial aid to Pakistan to ensure it is not used to fund terrorist activities against India. In another delegation, he lobbied for a US-India Civil Nuclear Deal and blocking a killer amendment against it in the US Congress. He encourages and promotes better understanding between the Unites States and India by encouraging members of the US Congress to visit India.

Gitesh Desai has written articles in the Houston Chronicle advocating for Indian interests. He supported India when economic sanctions were imposed by President Clinton after Pokhran nuclear tests. He wrote an opinion critical of Pakistan for promoting terrorism during Kargil war. He was a forceful advocate in print media for the view that strong US-India relations were in line with American interests during Prime Minister Modi’s maiden visit to the White House during the Obama administration.

He argued that the United States should export liquefied natural gas to India to further ties with India as a major strategic partner. He is one of a select few Indian Americans that articulates opinions in local media outlets in support of India’s causes and concerns.

Gitesh Desai is a leader in building closer links between India, the overseas Indian community and their country of residence.
He has been in the Houston community over thirty-five years and has been a member of and headed several well-known community organizations. He is actively involved in the International Day of Yoga celebrations and has both taught yoga and made efforts to increase public awareness of yoga. He has facilitated the founding of new chapters of Ekal Vidyalaya in Texas.

He participated in community fundraising for the Latur (Maharashtra) and Bhuj (Gujarat) earthquake victims. He has organized public meetings for visiting Indian dignitaries representing the spiritual, cultural and political fields. Desai was one of the delegates in the Harris County Trade Mission to India which promoted business ties between India and the Harris County.

Gitesh Desai is a frontrunner in social and humanitarian causes in India and abroad, Welfare of the local Indian community and Philanthropic and charitable work
As president of the Sewa International Houston Chapter he led humanitarian rescue operations during Hurricane Harvey in greater Houston that directly rescued 687 victims. Desai lost everything he possessed on the ground floor of his house after it was flooded with five feet of waters for fourteen days. Despite his personal loss, he continued serving, mobilizing approximately 1,250 volunteers and collecting over $1,000,000 in donations including a $400,000 grant from the Mayor’s Fund for relief and rehabilitation efforts, the first ever such grant to any Indian American organizations in the United States. Desai exhibited character, conviction and courage during the crisis.

Presently, Gitesh Desai is Coordinator of The M. S. University Alumni Foundation of USA that raises funds for scholarships for deserving students who have limited means for higher education. He has met  the university officials last year and is in regular communication with them in advancing scholarship program.