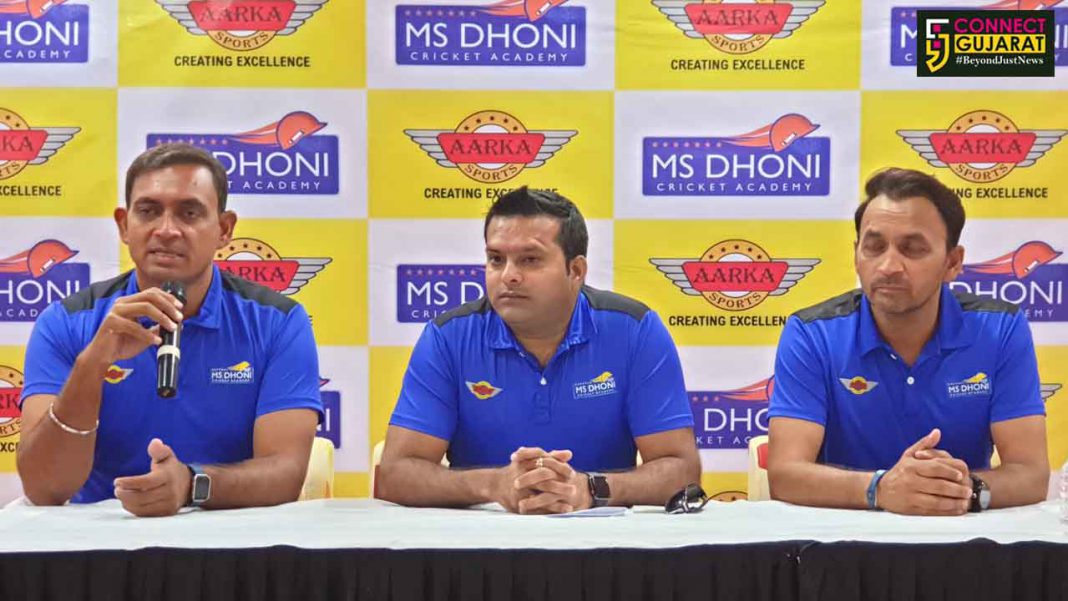 Plans to start a academy in future

The camp will have kids from 6 to 19 years and target 100 of them in one session. The project is purely to identity the local talents and give them world class infrastructure facilities to help them grow in their career.

“This is for the first time we are opening a clinic at Vadodara and in the whole Gujarat. We focus on Tier 2 and 3 cities to identity the talent and give them world class coaching to compete at the top level. We partnered with VCA for the clinic session and try to identity them in the camp. Level 2 and 3 coaches, trainers, physio, nutritionist and video analyists will be there with the kids during the seven day session,” said Munish Rao Business Head Aarka Sports the company managed MSDCA.

During the Cricket Coaching Clinic in Vadodara, children will be undergoing specialized training under the guidance of accredited coaches from BCCI.

MSDCA is an institute of Aarka Sports which comes of a simple thought of ‘Giving back’ from MS Dhoni and Mihir Diwakar and completely set to transform the standard of coaching and development of cricket in India and abroad. Equipped With all modern technology, high class coaching facility & certified coaches MSDCA is spreading its centers to every comer of India and abroad.

Aarka Sports was established in 2014 has focused on sports management and sports consultancy services in India and Abroad. Aarka Sports is founded by Mihir Diwakar, a sportsman himself. Mihir was part of India U-19 world Cup Winning team and has performed at the highest level to relate to the needs and wants of Sports and Sportsperson. Objective of this initiative is to bring structured cricket coaching to all the aspiring cricketers in India.

As per Mihir Diwakar the initiative to start Cricket Coaching Clinic is to reach out to different parts of the country and built a cricket community in each zone by hiring local coaches and creating opportunities for children.

“We started from 2015 with the first academy at Bareily and then spreads to the other countries like Singapore and Dubai. We are focusing on the Tier 2 and 3 cities to identify the cricketing talent and polish them with world class coaching and training to help them compete at the international level. From Mahendra Singh Dhoni to international cricketers like Shane Bond, Imran Tahir and Farveez Mahroof also interact with the kids from time to time. We are also in the process to launch a application where these cricketers can interact with them. We are also in process to prepare a 11 players team consists of world class players who will be with us and share their expertise with the players of the academy,” said Rao.