Home > Education > MSC Science student met her idol Venky, took autograph of him on his portrait made by her
Education

MSC Science student met her idol Venky, took autograph of him on his portrait made by her 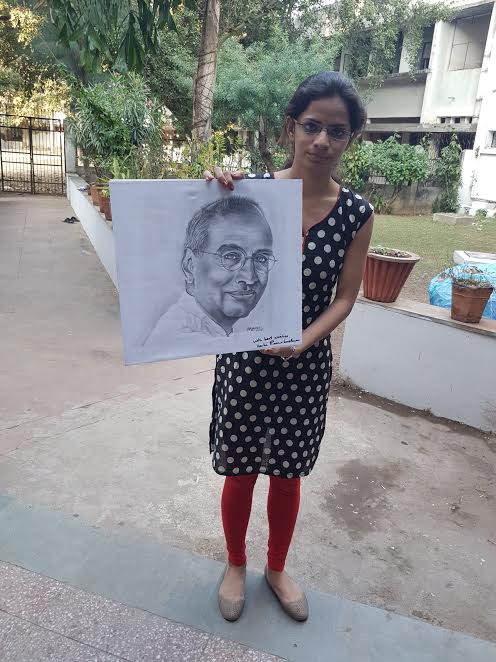 Its a lifetime moment for first year MSC student of MSU Baroda when she met her idol nobel prize winner Venkataraman Ramakrishnan during his lecture in the city on Wednesday. The moment was more priceless for her when Venky gives his autograph on a portrait made by her.

Bhumika Pradhan is on cloud nine after she met her idol in MSU during a lecture on 100 years of Visualizing Molecules in C.C. Mehta Auditorium. Bhumika is a Science student but making portraits is her hobby. But she never knew that her hobby will get her the moment of her lifetime.

"I made the portrait of my idol nobel prize winner Venkataraman Ramakrishnan to present him during the lectures series. I was not sure that he will accept the portrait I made but to my surprise he not only appreciate the portrait but give his autograph on it. Even more he talked to me and took my photograph on his mobile which is a life time moment for me," said Pradhan.

She further added that the Interaction was very inspiring for me as he was from the same department and we are the next gen. She also added that his dedication to Science inspires them to work hard and by heart.