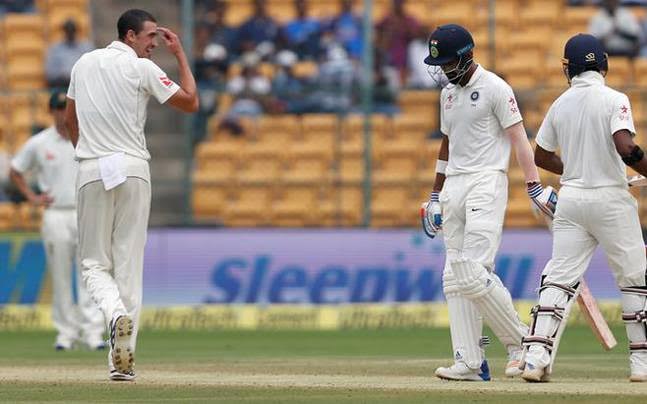 Mitchell Starc says he wants to hit Ravichandran Ashwin’s helmet when India tour Australia next for a Test series. The two were involved in on-field banter during the ongoing India vs Australia Test series.

Mitchell Starc has gone back to Australia from the ongoing Test series against India with a foot injury, but his mind remains glued to the intriguing contest. Apart from intense on-field rivalry with the series tied at 1-1, the four-match competition has seen players engaging in sledging and banter. Among such incidents, one prominent one was when the Australian fast bowler was given a cheeky send-off by Ravichandran Ashwin during the second Test in Bangalore. The Indian off-spinner Ashwin’s reaction came after Starc had a made an almost similar gesture to Ashwin’s Tamil Nadu state teammate Abhinav Mukund, when the latter was treated with some short-pitched deliveries.

Starc, in a jest, said he would want to try bowling the same to Ashwin, when India tour Australia next. “I look forward to bowling to Ashwin in Australia. (I might) take his advice and hit him on the badge,” Starc told cricket.co.au.

He also accused Virat Kohli-led India to be the team that engaged in sledging more than the visitors. “(The on-field banter has) probably come a lot more from their side than ours. There was a lot made of it before the series and there was so much hype before the series. I think we’ve just gone about the cricket that we have done for a long period of time now,” he said.

The debate started with Stark himself in the Bangalore Test. In fact, Abhinav Mukund hit a six on his bouncer. On this, Stark pointed Mukund with his finger to the forehead. And in the same match, Ashwin, after getting wicket of Stark Ashwin repeated the same with the same word Starc for revenge for his fellow player