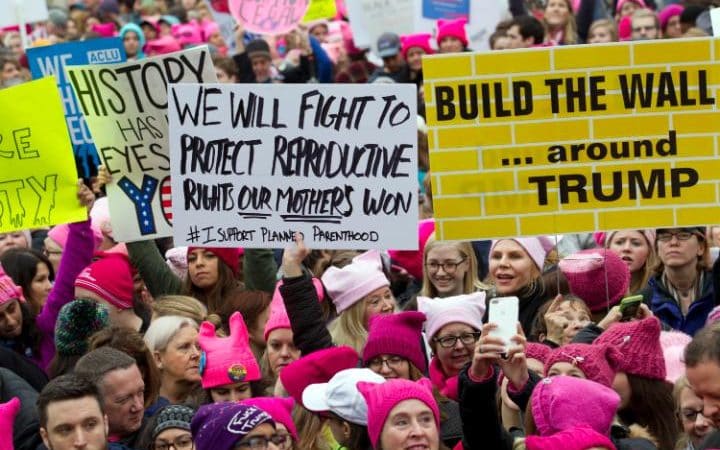 More than one million people marched across the US and the world to show support for women’s rights and express their discontent over the election of US President Donald Trump.

The Women’s March on Saturday drew members of Congress, world-famous actresses and countless citizens protesting for numerous reasons, including immigration, health care and a general antipathy to Trump, CNN reported.

But most said they wanted to show support for women and feared that there will be attacks on women’s rights during Trump’s presidency. Many women wore knitted pink “pussy hats” – a reference to a recording that emerged during the election campaign in which Trump talked about groping women.

The biggest demonstration took place in Washington, where protesters filled Pennsylvania Avenue, the same street Trump walked down on Friday during his inaugural parade.

On Saturday evening, the crowd moved toward the White House. “It took this horrific moment of darkness to wake us the f–k up,” Madonna told the crowd.

“It seems as though we had all slipped into a false sense of comfort, that justice would prevail and that good would win in the end, citing the singer as saying. The police said the crowd there was too big for the march route and could not proceed because “it would be like a snake eating its tail”.

Senator Elizabeth Warren urged Boston protesters to resist: “We can whimper. We can whine. Or we can fight back! We come here to stand shoulder to shoulder to make clear: We are here! We will not be silent! We will not play dead! We will fight for what we believe in!”

In Los Angeles, more than 100,000 people marched. Demonstrators in New York City marched towards the Trump Tower — the President’s main residence — but were blocked at Fifth Avenue,

Belfast, Cardiff, Edinburgh, Leeds, Liverpool, Manchester and Bristol were among the other UK cities holding protests,

There was even a protest in Antarctica — about 30 eco-minded tourists and non-government scientists aboard a ship in international waters hoisted signs saying “Penguins for peace” and “Seals for science”, the march organisers said.