From the frozen streets of Russia’s Far East and Siberia to the grand plazas of Moscow and St. Petersburg, tens of thousands of Russians rallied in support of the jailed opposition leader Aleksei A. Navalny on Saturday in the biggest nationwide showdown in years between the Kremlin and its opponents. The demonstrations did not immediately […] 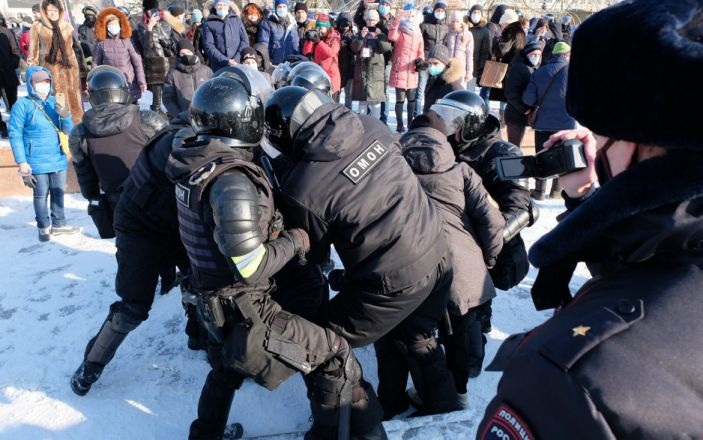 From the frozen streets of Russia’s Far East and Siberia to the grand plazas of Moscow and St. Petersburg, tens of thousands of Russians rallied in support of the jailed opposition leader Aleksei A. Navalny on Saturday in the biggest nationwide showdown in years between the Kremlin and its opponents.

The demonstrations did not immediately pose a dire threat to President Vladimir V. Putin’s grip on power. But their broad scope, and the remarkable defiance displayed by many of the protesters, signaled widespread fatigue with the stagnant, corruption-plagued political order that Mr. Putin has presided over for two decades.

The protests began to unfold in the eastern regions of Russia, a country of 11 time zones, and they moved like a wave across the nation despite a heavy police presence and a drumbeat of menacing warnings on state media to stay away.

On the island of Sakhalin, just north of Japan, hundreds gathered in front of the regional government building and chanted, “Putin is a thief!” The protests spread to the sub-Arctic city of Yakutsk, where it was minus 60 degrees Fahrenheit, and to rallies attended by thousands in cities across Siberia. Hours later, as night fell in Moscow, people pelted the police with snowballs and kicked at a car belonging to the domestic intelligence agency.

By late evening in Moscow, more than 3,000 people had been arrested in at least 109 cities, according to OVD-Info, an activist group that tracks arrests at protests.

Mr. Navalny’s supporters claimed success and promised more protests next weekend — even though many directors of his regional offices had been arrested.

The protests came six days after Mr. Navalny, a 44-year-old anti-corruption activist, was arrested upon his arrival in Moscow on a flight from Germany, where he had spent months recovering from poisoning by a military-grade nerve agent. Western officials and Mr. Navalny have described the poisoning, which took place in Siberia in August, as an assassination attempt by the Russian state. The Kremlin denies this.

Mr. Navalny, who now faces a yearslong prison term, called on his supporters across the country to take to the streets this weekend, even though officials did not authorize protests.

Russians responded with the most widespread demonstrations that the nation has seen since at least 2017 ,numbering in the tens of thousands in Moscow and St. Petersburg and in the thousands in each of several cities to the east, including Yekaterinburg, Novosibirsk, Tomsk, Omsk and the Pacific port of Vladivostok.

Mr. Navalny, long Mr. Putin’s loudest domestic critic, has used his populist touch on social media and humorous, tough and simple language to emerge as Russia’s only opposition leader commanding a following across a broad cross-section of society. His status among Putin critics rose further in recent months when he survived the nerve-agent attack and then returned home to Russia even though he was facing near-certain arrest.