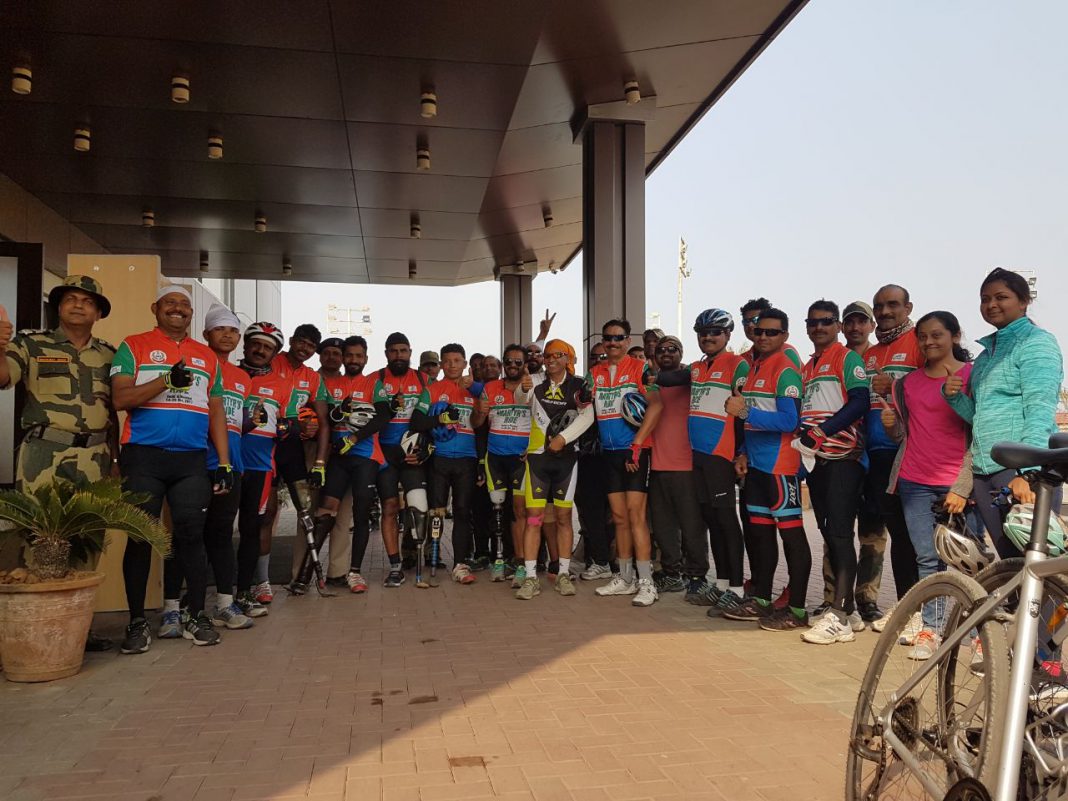 Its a special tribute by cyclists to the martyr of armed forces and the people lost their lives in the tragic Mumbai terror attacks this year on 26th November 2017. The group including paracyclists started from Delhi India Gate and after completing 1450kms will reach Mumbai Gateway of India and pay tribute to the martyrs and the innocent victims of Mumbai attack.

Border Security Forces (BSF) in collaboration with Aditya Mehta Foundation (AMF) organise the ‘Martyrs’ Ride’ from the India Gate in New Delhi to the Gateway of India in Mumbai to commemorate the ultimate sacrifice made by hundreds of armed force and police personnel during the ghastly attack by Pakistani terrorists in 2008.

The cyclists including  BSF jawans, a CRPF personnel and six paracyclists set off from Delhi on 14th November and complete their 1,450 km journey on their cycles on November 26, the very day the attacks had begun in Mumbai. The expedition was flagged off by BSF’s Director General K.K Sharma, IPS, who has been very supportive towards para-sports and will be play an integral part in AMF’s ‘Mission 2020’ which aims to send 100 para-athletes for the Paralympics.

The AMF, headed by champion para-cyclist Aditya Mehta, has embarked on similar rides earlier too to raise funds for para-athletes in the country. He has reached out to armed personnel this time with the aim of motivating soldiers who have lost limbs in the line of duty to take up para-sports.

“We start with messages of peace all along our route and pay our tributes to the martyrs of armed forces and the people lost their lives in the terror attack in Mumbai. Secondly we are spreading the message of para sports among the people who lost their limbs and lives in gloom. We Counsel them and make them understand to play sports even sitting on their wheelchairs. We also working on the mission 2020 which aims to send 100 para athletes for the Paralympics amd won 100 medals for the country,” said Aditya Mehta.