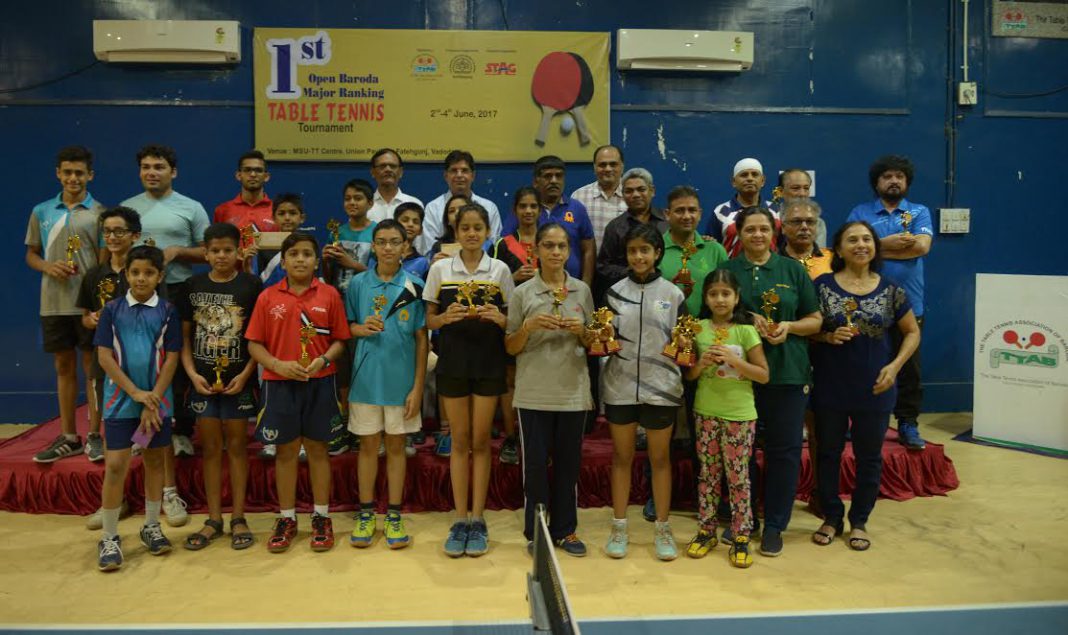 The championship was organized by the Table Tennis Association of Baroda (TTAB) from 2nd to 4th June 2017. Manush Shah won the men’s title after beat Jalay Mehta in the finals. The impressive was Purva Nimbalkar who went on to win four crowns and proved her dominance in the girls section. In other categories of the boys, the upcoming deserving paddlers have clinched the titles.

In Veteran’s 60 plus Dr. Shivaji Kanate beat Sanjiv Khasnavis while in the 50 plus Men category Satish Patel beat Nitin Bhatt to lift the crown. In 40 plus Women’s singles Padmini Desai beat Kokila Patel and in the same age group in Men’s category Brijesh Narigara beat Sanjeev Mahajan in the finals to won the title.

In the Cadet Girls Juhi Vasavada beat Helly Narigara and in Cadet Boys Param Damani beat Moksh Shah in the finals. In Sub Junior Girls Purva Nimbalkar beat Kashish Goswami to pick the crown. Her dominance not ends here and she went on to win three other titles by beating her opponents in Junior Girls, Youth Girls and Women Singles. She beat the same opponent Kashish Goswami in Junior and Youth Girls and later beat Sheetal Shah in Women’s Singles to lift the crown.

It was a wonderful experience to watch the high class performance in this tournament in which all the winners really deserve their victory. The winners of each category have been appreciated by awarding cups, certificates & cash prizes. TTAB offered special prizes to the upcoming bright talents for appreciating & boosting up their moral.