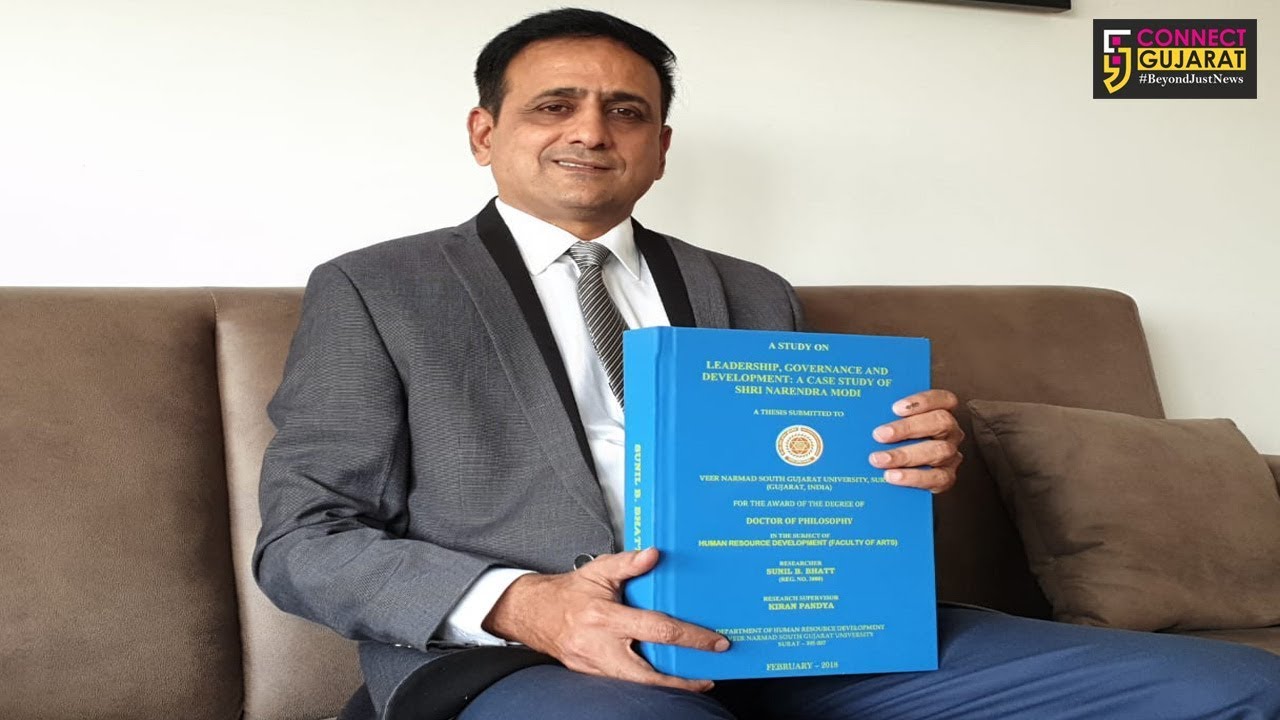 Sometimes an inspiration is enough for a person to pen down his thoughts for the others to follow. Such a similar situation happens to a management professional and student Sunil Bhatt who has successfully completed his PhD on his inspiration Narendra Modi. After completing his research he now plans to write a book on him taking the crux of his thesis and the change after Modi became Prime Minister of India.

Bharuch based Student Sunil Bhatt has successfully completed his PhD on Narendra Modi during his reign as a CM of Gujarat. An HR Professional and a farmer he is also Hon. General Secretary of Dahej Industries Association and Chairman of HR forum of Bharuch District Management Association. He submitted his thesis on ‘Leadership, Governance and Development : A case study of Shri Narendra Modi’ and successfully completed it in March 2019.

He appreciated inspiration and guidance of his guide Dr Kiran Pandya who also belongs from Bharuch District, village called Sigam. Sunil, has done his LL.B. and Masters in HRD has rich experience of more than 25 years as an HR Professional. He is basically a farmer from village called Sajod in Ankleshwar. He started his career as Housekeeper in Industry and raised his bar by putting efforts to reach at the level of Vice President – HR.

"I worked with many foreign multinational companies and two of them were inaugurated by PM Narendra Modi while he was CM of Gujarat. I came across with Modi during this time and got inspired with his leadership style and approach on good governance. The review mechanism is one of the strong points and it prompted me to further research on his Leadership style which impacted governance mechanism resulting in development," said Bhatt.

Sunil registered himself in Veer Narmad South Gujarat Univerisity, Surat, Gujarat in March, 2013. However, he had started his thinking process on this topic and subject since 2009.

"I started conceptualized the topic from 2009 and conducted in-depth interviews of 22 people from politicians, bureaucrats and academicians worked with Modi. I also conducted survey of 52 industries to examine the governance mechanism facilitating development. I studied government and agencies reports and articles, journals and books for development," said Bhatt.

Sunil examined his leadership in six categories of Leadership Role, Ensure deliverance, Working effectively with Individual and Team, Exercise effective control, Behaving with integrity, Open and accountable. The statements which have scored more than 75% as the highest rating have been selected as Areas of Excellence, whereas the statements for which 50% or less has been selected for the highest rating have been classified as Areas with Scope of Improvement.

The overall rating for all the aspects of Governance has been positive. Further, there is no difference between the experience of companies irrespective of the location of industry, type of industry, size of industry. The key factors identified for the Governance are “Registration Formalities”, “Administrative Services” & “Infrastructure Services”. The leadership played major role in improving governance and that is reflected in overall development.

"Based on these 6 parameters Narendra Modi is found to be a Transformational leader. There is a charisma in him and influence others to work with him. He motivates and engaging people to work together and a vision to set. I found him decisive and committed towards his work and behaving with integrity to others," said Bhatt.

During his PhD Bhatt met Modi only once and impressed with his charisma. He includes his biography starting from his childhood, education, RSS and groom himself to be in politics. As Bhatt successfully completed his PhD he is now waiting for a confirmation from PMO office for a meeting to present the thesis to PM Narendra Modi by himself.

His family equally supported him during his PhD and proud to be associated with such a study on PM Narendra Modi. "We met many persons during the interviews and sometimes shoot with the camera. Its a privilege to be part of the thesis and we are felling proud as the thesis is successfully completed," said Apexa Bhatt wife of Sunil Bhatt.