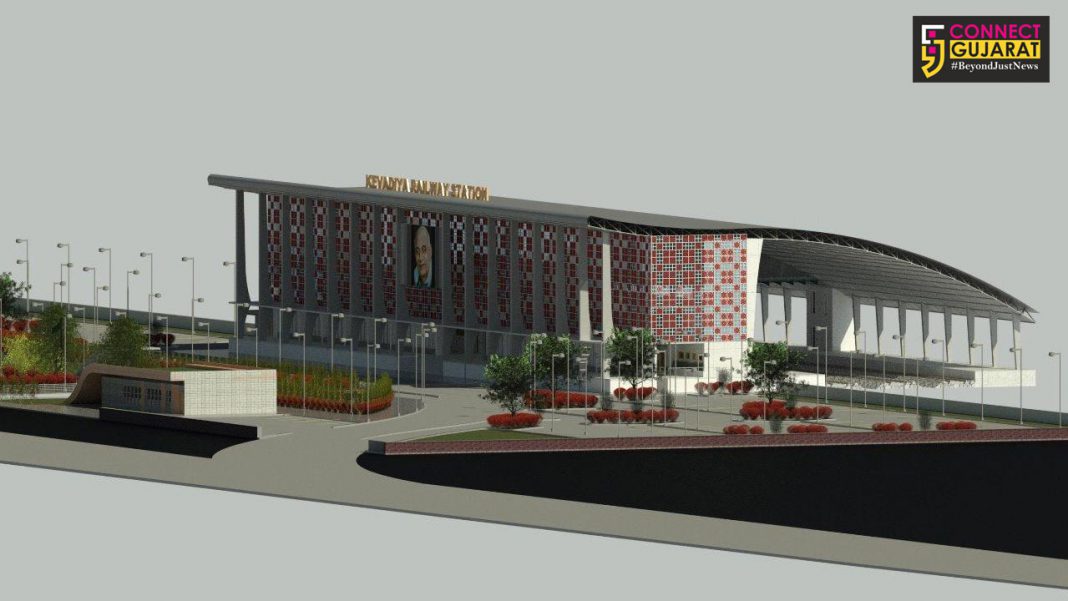 The cultural capital of Gujarat ‘Vadodara’ and its nearby areas have witnessed major transformation in recent years with execution of various infrastructural projects. Focussing on enhancement of passenger conveniences and several important achievements the railways start many ambitious projects including dedication of India’s 1st Rail university i.e. National Rail & Transport Institute at Vadodara and foundation stone laying of a world class ultra modern railway station at Kevadiya near Statue of Unity.

Vadodara the third largest city of  Gujarat located on the banks of Vishwamitri river is an important industrial, cultural and educational hub of western India. The city houses several institutions of national and regional importance and also has a rich legacy of history being the erstwhile princely state of Baroda.  The Lakshmi Vilas Palace which is the residence of Baroda State’s Maratha royal family, the Gaekwads of the Gaekwad Dynasty stands tall in witness to this city’s progress and development.

Vadodara station is a junction station connecting the two very important routes of Mumbai – New Delhi line of Golden Quadrilateral and Mumbai – Ahmedabad line. It caters to around 200 trains daily and some of the important trains that halt at Vadodara station are Mahamana Express, Rajdhani Express, Duronto, Humsafar, Antyodaya and many other long route trains. It is a NSG2 category station and has 7 platforms.

In last five years, more than 30 new trains were added and the number is set to increase in future. One of the celebrated trains is the Mahamana Express which connects Vadodara to its twin cultural city of Varanasi. Western Railway is taking all efforts to make the travelling experience of the passengers of Vadodara more pleasant, convenient and comfortable.

The station has been beautified with thematic painting giving it a facelift and makeover. Currently it is well equipped with FOBs, Lifts, Escalators, Waiting halls and Dormitory rooms for men and women, Retiring rooms, seating arrangements all over the station premises, water coolers, food plaza, Modular toilet blocks, Namma toilets, Foot Over Bridges with ramps for Divyang persons, LED screens for display of time – table, Electronic Chart Display System, free Wi – Fi facility to ease the journey of the passengers. Battery Operated carts have been provided at Vadodara station to ferry divyangs, senior citizens from one platform to another. Moreover, Child Help Desk, Baby Feeding Corner and Sanitary Napkin Vending Machines and Incinerator are also available at this station.

With a major thrust to environmental concern, solar panels and Bottle crushing Machines have been installed at Vadodara station. With the provision of Free Wi – Fi facility at Vadodara, Bharuch, Ankleshwar and Anand stations, waiting for trains at stations can be more entertaining and also informative. Various works related to passenger amenities amounting to more than such provision of cover sheds, boundary walls, extension and raising of platforms, improvement of platform surface, renovation of waiting rooms and concourse area are been undertaken on a major scale. In the last 5 years, almost 30 new train services have been added and additional halts of several trains have been provided to ferry passengers, benefiting Vadodara, Anand, Bharuch and its vicinity areas.

Vadodara is the home of the Maharaja Sayajirao University of Baroda, the largest university in Gujarat. Now, it also boasts of the “National Rail and Transportation Institute” –  India’s first Deemed to be Rail University under the de novo category, nestled inside the National Academy of Indian Railway (NAIR), having about 55 acres of campus. This institution focuses on imparting transport related education, multi-disciplinary research and training to create a resource pool of best-in-class professionals for the railway and transportation sector.

The idea of setting up the first Rail and Transportation University was conceptualized by Prime Minister Narendra Modi and spearheaded by Piyush Goyal – Minister of Railways. This vision became a reality on 5th of September, 2018 on the auspicious occasion of Teacher’s Day, when the National Rail and Transportation Institute (NRTI) opened its doors to the first batch of 103 students from across 20 states of India, in two fully-residential undergraduate courses. The students are being taught by excellent faculty with education and extensive teaching experience in premier Institutions such as IIT Madras, IIT Mumbai, XLRI Jamshedpur, University of Calgary, Canada and University of Pennsylvania, USA.

NRTI is focused on developing global and national partnerships with top universities and organizations from across the world. This will enable access to the latest pedagogy and program design, and prevailing transportation related domain knowledge, innovations and research developments. NRTI has adopted an interdisciplinary approach for research of transport systems—it is bringing together academicians, scientists and engineers from various backgrounds, and plans to leverage its academic and industry partnerships and collaborations. Now, more additions are being made to this edifice such as multi-storey Hostel building with 250 rooms, mess and recreational hall at a sanctioned cost of Rs. 44 crore with further upgradations such as Auditorium, Sports Activity Centre and additional 50 suits premium hostel.

Similarly, the ambitious project of running the Bullet train in India is taking shape step by step and Vadodara is also a partner in this mega project, with the stations of the Mumbai – Ahmedabad Bullet train set to be coming up in Vadodara, Bharuch and Anand. This project will take travelling experience altogether to another level. W. Rly is leaving no stone unturned to ensure a pleasant travelling experience for the passengers while at station and also in train.

The construction work of high speed tracks for Bullet train corridor will require closure of platform No. 6 & 7 at Vadodara for longer duration thereby further congesting the Vadodara station. To alleviate this problem, Chhayapuri station which was a flag station near Vadodara junction in Vadodara city has been developed as a new satellite station at a total cost of Rs. 43 crore. It is situated on bypass chord connecting Vadodara – Ahmedabad line and Vadodara – Ratlam line.

Chhayapuri as a satellite station will serve as an additional station for city of Vadodara for trains running on Ahmedabad – Ratlam and onwards route. It has 2 full length platforms for 26 coach trains and 2 loop lines. The 19 pairs of trains operated from Ahmedabad to Ratlam – Delhi via Vadodara trains & vice versa will not be required to undergo reversal at Vadodara. This will save around 27 minutes per train and ease Vadodara station of congestion. This will pave way for introduction of more trains on these routes and also improve the punctuality. The areas surrounding the Chhayapuri station will also see a spurt in development as the new station will open the doors to opportunities and convenience.

India is home to the world’s tallest statue – the Statue of Unity and it is already garnering a huge fan base with thousands of tourists thronging this iconic monument and enjoy the scenic and panaromic beauty of the Narmada Valley, not only from India but across the world. Indian Railways has taken one step ahead to put this engineering marvel on the railmap of India by constructing a new world class and ultra modern railway station at Kevadiya. The foundation stone of this state of the art station was laid by President Ram Nath Kovind on 15th December, 2018 in the presence of Chief Minister of Gujarat Vijay Rupani, Minister of Railways Piyush Goyal and other dignitaries.

The proposed Kevadiya railway station is located just 5 Km from the ‘Statue of Unity’ and will cater as an easy access railhead point for the tourists visiting this iconic statue. The work of proposed Kevadiya Station Building comes under the Gauge Conversion project of Dabhoi – Chandod section (18 Km) with extension of line upto Kevadiya (32 Km). The proposed station building of Kevadiya will be constructed at an estimated cost of Rs.20 crores. The station will have special provisions for Divyang people such as ramps to wheel chair access, lifts and escalators for movement to different floors, disabled friendly washrooms on both sides of the railway station.

The station will have multiple waiting areas including the general waiting rooms, AC waiting room and VVIP/Executive lounge to host senior officers & leaders. The overall station building is a 3-level structure with the first level and second level specifically covering all station related facilities like Station Master room, General Waiting room, VIP room and also an Executive lounge for VVIPs and foreign tourists. The third level will have an art gallery that will promote local and tribal art and craftworks.

This is also the first railway station in India with a Green Building Certification since inception of construction and the station will house the best of technologies, environmental conscious and aesthetical pleasing components integrated in the design of the building. The building is consciously designed which minimizes the disturbance of existing eco-system on the site. Recycled material such as fly-ash bricks, insulating glasses for air conditioned rooms, and local materials will be used in the building to reduce the overall carbon emission of the building.

The station roof will be installed with solar panels with a potential of generating upto 200 KW electricity. The station will have a combination of multiple water management facilities including rain water harvesting, sewage treatment plant, eco-waterless urinals and drip irrigation technology using treated water. Waste segregation at source will be promoted through provision of separate bins and the segregated green waste will be reused at source to produce fertilizer for gardening.

Taking the eco friendly initiatives ahead, W.Rly has implemented the Head On Generation (HOG) system in 44 electric locomotives based in Vadodara shed, which reduced the consumption of diesel as well as the noise in station area. A savings of Rs. 27.18 crores were accrued with the switching over to HOG system. Real Time Train Information System has been provided in 159 electric locomotives hauling passenger trains, based at Vadodara shed. This has enabled in monitoring real time running of Mail/ Express trains and thus helps the passengers in getting accurate status of running of their train.

Similarly, 250 Diesel locomotives have been fiited with REMMLOT device for its real time location. A new Broad gauge line between Chhota Udepur in Gujarat & Dhar in Madhya Pradesh is under progress wherein a section of 48.55 kms of new line upto Alirajpur has been completed and is being opened for movement of passenger and goods trains. With this, areas upto Alirajpur on this line will get connected with Vadodara thereby with Mumbai – Ahmedabad/Delhi main line. It will provide impetus to the socio economic development of the tribal areas around Alirajpur. People from this area will get access to better job and education opportunities due to fast & convenient mode of transport upto Vadodara & further.

The agricultural production will also be benefitted with faster movement of produce to the markets all over India. The production of world famous mango Noor Jahan of Alirajpur will also get a boost due to better reach to markets and consumers. PM had laid the foundation stone of the Anand – Godhra Doubling Project. For the longest period of time, Anand and Godhra were connected through a single line. Eventhough the two upcoming cities of Gujarat is only 78.80 kms apart which is a major bottleneck for the increasing frequency of trains. The Doubling will give an operational boost to the rail traffic.  This project will be beneficial for smooth running of traffic and will help to decongest the traffic of the section. The sectional capacity can be increased and punctuality of trains will be enhanced. Besides providing connectivity, it will bring boost to the local economy and socio-economic development of the surrounding areas.