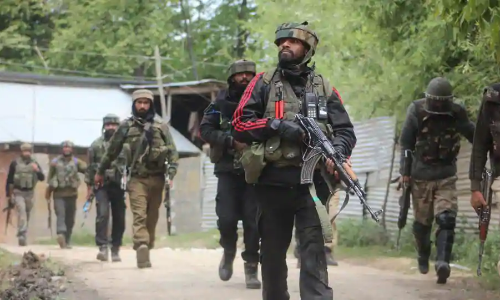 Seven people, including an Indian Army major and two Jaish-e-Mohammad (JeM) militants, were killed in a gunfight in Jammu and Kashmir's Pulwama district, barely 10 km away from the spot of the deadly February 14 suicide attack on the CRPF convoy, police said on Monday.

Defence Ministry spokesman Colonel Rajesh Kalia said: "One of the two slain JeM terrorists was a top commander and belonged to Pakistan."

The gun battle also claimed the lives of three other soldiers of different ranks along with a civilian identified as Mushtaq Ahmad.

The gunfight started late on Sunday after security forces, including the Rashtriya Rifles (RR), Special Operations Group (SOG) of the state police and the Central Reserve Police Force (CRPF), surrounded the village following a tip off that JeM militants were hiding in Pinglena village.

"As the cordon was tightened, the holed-up militants fired triggering the gunfight. Firing exchanges are continuing at the encounter site," Kalia added.

The gun battle comes less than a week after 49 CRPF troopers lost their lives following the attack that was carried out by a JeM suicide bomber on the Jammu-Srinagar highway in Pulwama.

It was the worst-ever attack in Jammu and Kashmir since militancy erupted in the state in 1989.