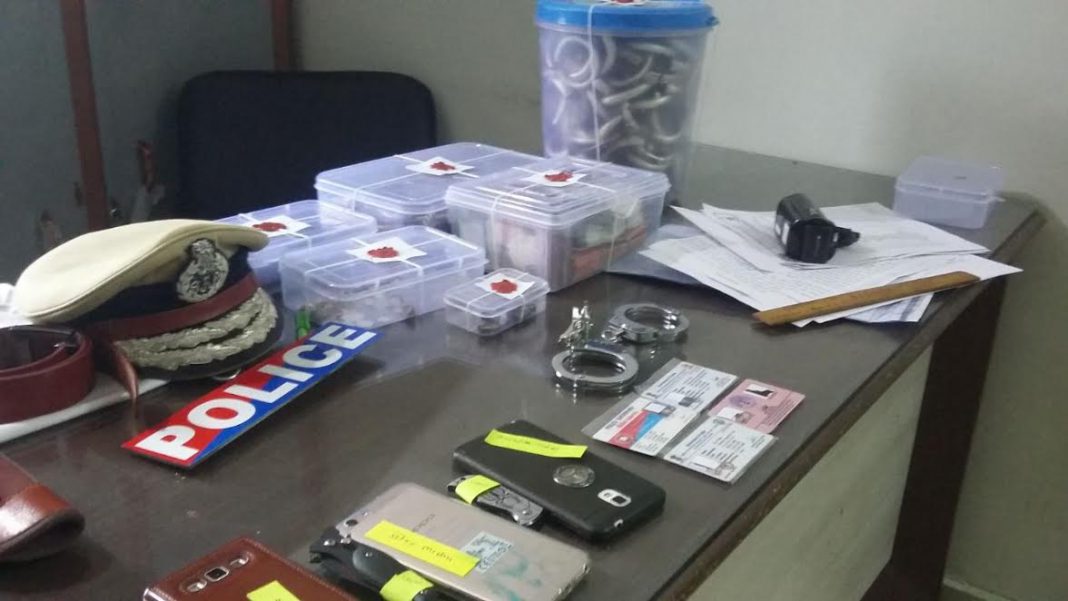 Mahisagar police arrested six persons for robbed a provision store owner pretending to be police and showing the DIGP I card to him. The accused fooled the businessman in the name of raid and took jewellery and cash total around 14 lakhs kept in the cupboard and Almirah of the provision store owner. After a perfect tip off the LCB and SOG in a joint operation arrested the accused and recovered the jewellery and cash.

According to the information on 4th February five persons pretending to be policemen went to the house of Dhirajlal Shah provision store owner in Limadia village. The accused showed a DIGP I card to him and told him about the raid inside the house. They then fooled him and looted him of jewellery and cash from the cupboard. The offence was registered under IPC 395 at Bakor police station in this regard.

Meanwhile the police kept Nakabandi to nab the accused and during the time LCB PI C.C. Khatana get the perfect tip about the Scorpio used for the crime was to pass through Virnia crossroads on Modhasa Godhra highway. The teams of LCB and SOG kept watch and detained the vehicle when it reached the above said spot. After searched the vehicle police found Raj Vyas, Mehul Suthra from Vadodara and Aniruddh Gadhvi and Lalbhai Baria from Godhra sitting inside. After searching them police found local made pistol, six live cartridges, DIGP I Card, knife from Raj Vyas, knife from Aniruddh Gadhvi, Handcuff from Mehul and also the cash and jewellery from inside the vehicle.

During primary Interrogation of the accused it was revealed that after the crime they have to part the bounty near Canal at Virnia and also kept three vehicles at the spot to flee from there. Police then reached the said spot and found three vehicles parked there and also two persons Satish Bhatia and Rajendra Vaghela present there. Satish is a homeopathic doctor and having a clinic at Limadia crossroads and Rajendra was said to have done the reiki.

Police arrested all the six accused and recovered four vehicles, DIGP written I card, Fire department DG I card, Press I card, Name plates, Dress, cap, National Crime Record Bureau Ministry of Home Department Government of India stamp letters from them. LCB police is further investigating and are in the process to get the remand of the accused.