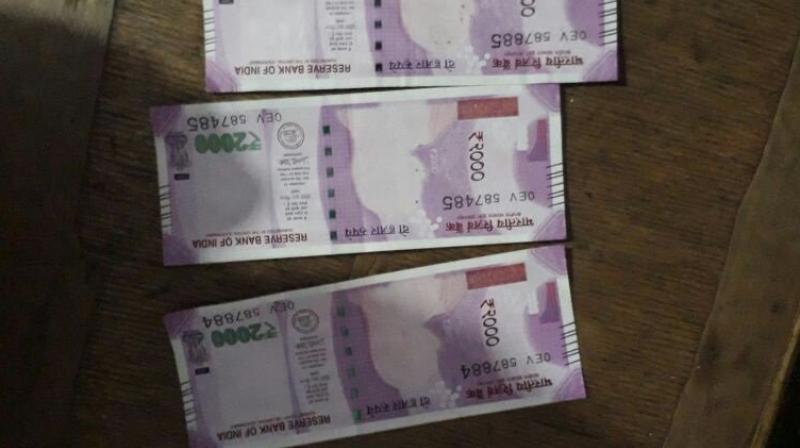 Out shopping with some money he managed to withdraw from his bank in this Madhya Pradesh district, a farmer was shocked when shopkeepers returned the Rs 2,000 note saying it was a fake since it had no picture of Mahatma Gandhi on it.

However, the State Bank of India branch, from where Lakshman Meena had withdrawn the money, on Thursday said they had changed the notes and attributed the faulty notes to a "printing mistake".

Meena and some other farmers from Bicchugavandi village had withdrawn money from a State Bank of India branch in Baroda town on Tuesday. He had chosen to take out Rs 6,000 and received three notes of Rs 2,000 each.

On Wednesday, when Meena went out to buy groceries, he was told that the notes do not have the picture of Gandhi and can be fake.

A worried Meena went back to the bank with all haste.

"The notes with missing Gandhi were taken back and exchanged for new ones. They were not fake but printing mistake," SBI bank official Aakash Srivastav told IANS on Thursday.

According to sources, the amount was received from SBI's Sheopur branch chest in bundles of Rs 2,000 in which there were other notes as well with printing issues, because of which the bundle is being sent back to the branch. It is not yet known how many others have received such notes.

Since the demonetisation in November 8 last year, many such cases involving Rs 2,000 notes have come forward, such as notes with two pictures of Gandhi or having no water mark. But this was the first case where the Mahatma was entirely absent.