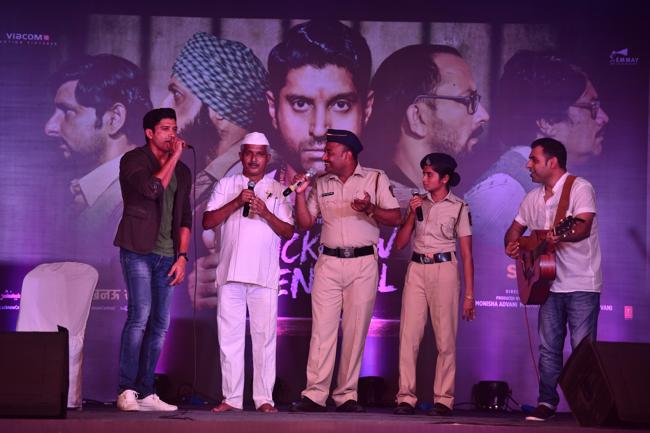 ‘Lucknow Central’ starring Farhan Akhtar, Gippy Grewal, Deepak Dobriyal, Diana Penty, Rajesh Sharma, Inaam-ul-Haq and Ronit Roy is a story of a group of prisoners forming a music band to escape. Captivating the essence of the film, the team of ‘Lucknow Central’ organized a special event at Yerwada jail, Pune.

The film depicts the journey of an innocent man who aspired to be a singer but is caught in the wrath of fate, wherein he lands in Lucknow Central jail after falsely being accused of a murder. There he, along with his fellow in mates, drafts a plan to escape the jail in the disguise of a music band.
The entire cast of the film, including Farhan Akhtar, Diana Penty, Ravi Kishan, Ronit Roy, Deepak Dobriyal, Rajesh Sharma, Inaam-ul-Haq were present at the event along with director Ranjit Tiwari and composers Arjunna Harjie and Rochak Kohli.
The event was also graced by the presence of Dr. Bhushan Upadhay- Additional Director General of Police, Swati Sathe- DIG prisons, UT Pawar- Superintendent of Prison, Yerwada Central Prisons. Along with the film’s team, the stage also saw Nitin Arole, an inmate, Prabhakar Mali- Male constable and female constable Pratibha, performing on stage.
While every year the jail inmates have a special function to celebrate the Independence day, the team of ‘Lucknow Central’ surprised the in mates by paying a visit this year. It was for the first time that an event on such a large scale was organised for the jail in mates.
The film stars Farhan Akhtar playing the role of an aspiring singer Kishen Mohan Girhotra whose life turns upside down when he gets wrongly charged with a murder, and is sent to Lucknow Central jail.
‘Lucknow Central’ being so heavily inclined towards music, the makers hit the right chord by organizing a special event at Yerwada, where in the cast performed on songs like a professional band.
Produced by Viacom18 Motion Pictures and Emmay Entertainment and Motion Pictures, the film is directed by Ranjit Tiwari and is slated to release on 15th September 2017.