Prime Minister Narendra Modi on Tuesday called for an end to the ‘Chalta hai’ attitude of complacency and adopt a ‘Badal sakta hai’ attitude to bring about positive change. The Prime Minister was addressing the nation from the ramparts of the Red Fort on the occasion of the 71st Independence Day. “It is now time to end […] 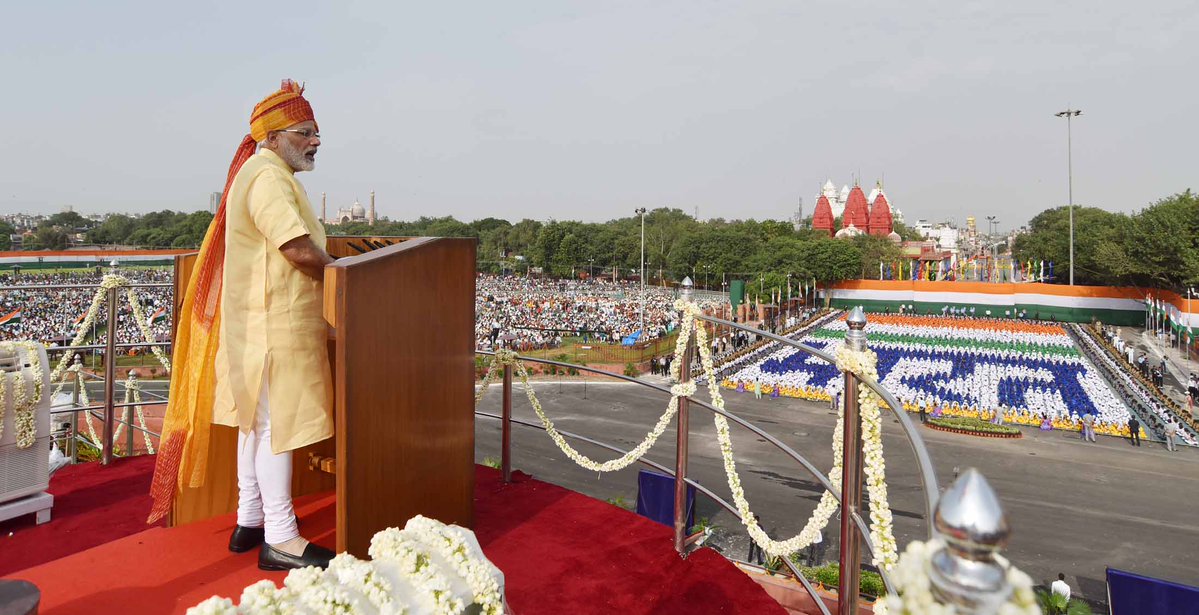 Prime Minister Narendra Modi on Tuesday called for an end to the ‘Chalta hai’ attitude of complacency and adopt a ‘Badal sakta hai’ attitude to bring about positive change.

The Prime Minister was addressing the nation from the ramparts of the Red Fort on the occasion of the 71st Independence Day.

“It is now time to end ‘chalta hai’ attitude of complacency, and its replacement with an attitude of ‘badal sakta hai’ (needed) for positive change,” the Prime Minister said. 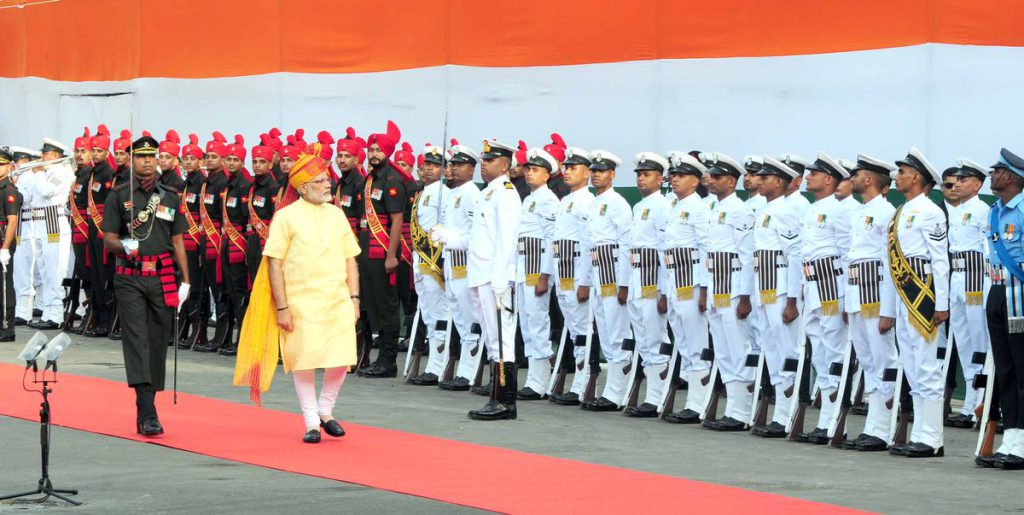 Prime Minister Narendra Modi called for a “New India” that will be free of casteism, communalism, terrorism and corruption as he urged those wielding the gun in Kashmir to join the mainstream so that the Kashmir problem is solved through “embrace”.

Addressing the nation from the Red Fort on India’s 71st Independence Day, Modi warned those indulging in mob violence, saying attacks in the name of “aastha” (faith) was not something to be happy about and won’t be accepted. 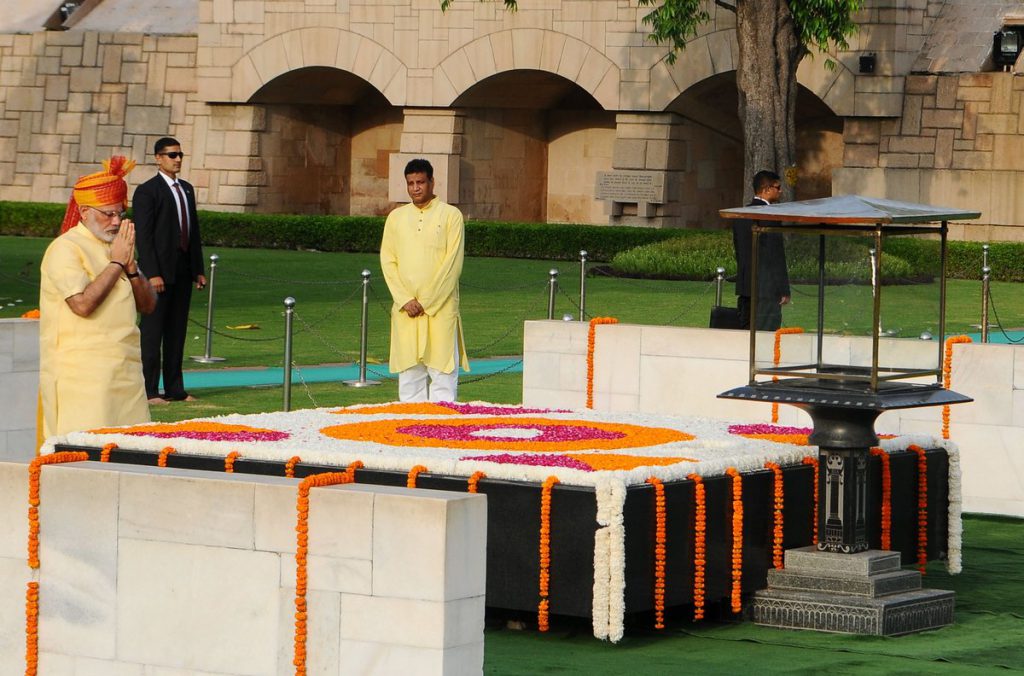 In a 56-minute speech, his fourth from the Red Fort, Modi touched upon various topics including demonetisation, black money and corruption and promised to take India ahead “with greater speed”. He hoped the campaign against Triple Talaq would succeed.

Declaring that Kashmir, “the heaven”, should be restored to its old glory, the Prime Minister said there had been a lot of mutual recrimination and blamed a “handful” of separatists for adopting new tactics to keep the problem festering. 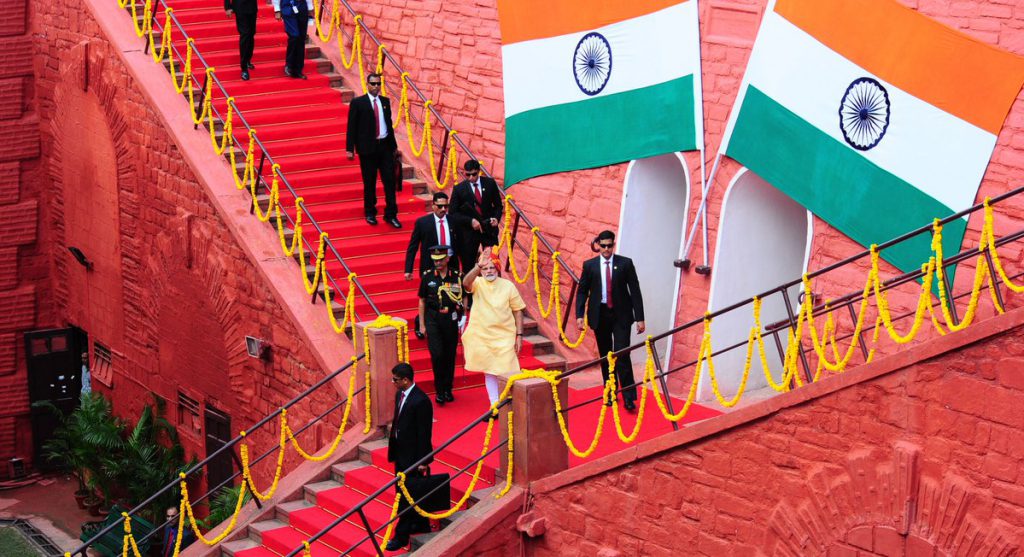 “There is no question of being soft on terrorism or terrorists. You (terrorists) come to the mainstream… Only mainstream can bring new energy in life,” he said, adding that many Maoists had joined the mainstream.

Unlike last time, Modi made no reference to Pakistan — or the border row with China. But he said India was not alone in its battle against terror and had the active support of many countries who shared intelligence inputs.

“We are working with them shoulder to shoulder. I thank them from the bottom of my heart,” he said, without naming any country. “India’s stature in the world is rising.” 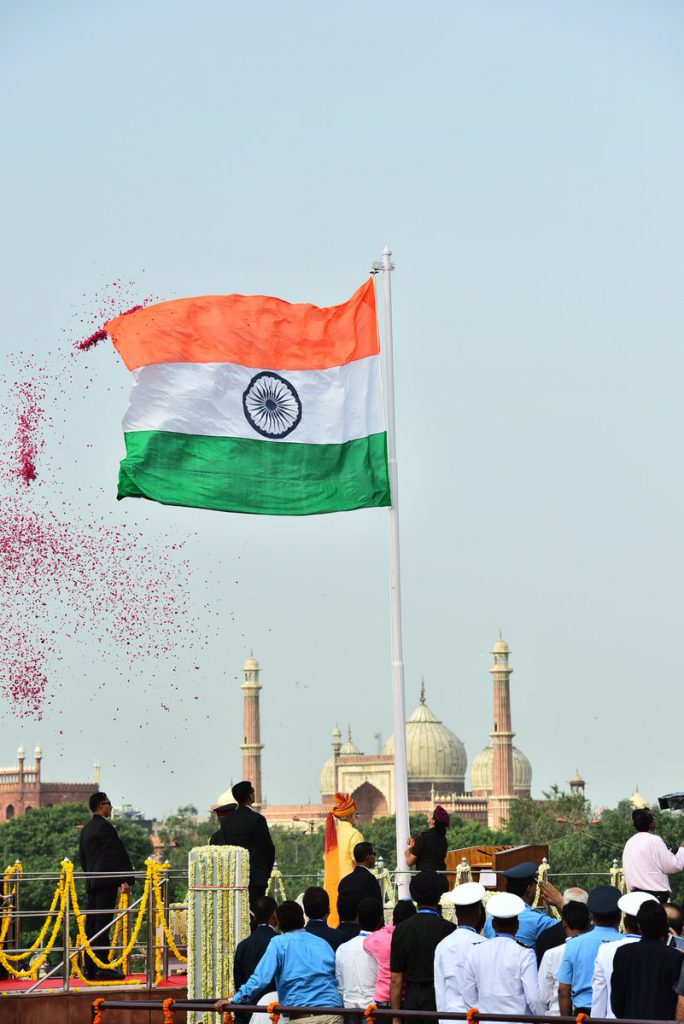 Saluting the security forces, Modi said: “Our uniformed and armed forces have never stepped back, be it leftwing extremism, terrorism or infiltrators or other internal security disturbances.”

He said the world had accepted India’s “might and strength” after the surgical strike against terror launch pads in Pakistan last year.

Deprecating violence in the name of faith, Modi said: “India is about shanti (peace), ekta (unity) and sadbhavana (harmony). Casteism and communalism will not help the country. There should be no violence in the name of faith. Hospitals cannot be burnt, government properties cannot be destroyed, our cultural heritage cannot be lost. Earlier, it was Quit India now it is Unite India. Everybody should be taken along.”

Referring to his government’s war against black money and corruption, Modi said this will intensify.

He talked about the seizure of benami properties worth over Rs 800 crore that were untouched for a long time.

“This has given confidence to the ordinary people that this is a land for the honest. Those who are honest are celebrating. The dishonest have no place to hide.”

On demonetisation, he took a jibe at critics who had said “Modi is finished”.

But, he said, it had brought back Rs 3 lakh crore into the banking system. “More than Rs 1.75 lakh crore suspected deposits are under scrutiny and Rs 2 lakh crore in black money has reached banks.”

He said 18 lakh people had been identified with assets more than their known sources of income. “Of this, 4.5 lakh people have accepted their fault. Interestingly, one lakh had never heard about income tax.”

Talking about the benefits of note ban, he said black money holders were doing business through shell companies. Now three lakh shell companies indulging in hawala trade had been detected.

“Some 1.75 lakh such shell companies have been de-registered and 400 (had) a single address. There was nobody to check or question them. All of it was being done in connivance…

“I have launched a big war on black money and corruption in the interest of poor and future generations.”

Modi said demonetisation had led to banks cutting down interest rates and increase in digital transactions by 34 per cent, pushing the country into a less-cash mode.

Dealing with the new Goods and Services Tax, he said this was brought and implemented in a short span of time, stunning the world.

Asserting that GST would bring about transparency, he said removal of checkposts had led to 30 per cent efficiency in goods transport system.

Modi insisted there would be a New India by 2022, when India marks 75 years of independence.

“I Invoke Team India to run for a New India by 2022. By then the poor shall have concrete houses, the farmer shall double his income, youths and women will get ample opportunities, an India free of casteism, terrorism, corruption, nepotism, a clean India.”

On the practice of Triple Talaq, he said he admired the courage of those fighting to end it. “I compliment them. We are with them in their struggle. I firmly believe they will succeed.”

Modi said a new hope had replaced hopelessness in India. “The usual attitude of ‘chalta hai, theek hai, chalne do’ (complacency) has been replaced and a new chapter has begun.”