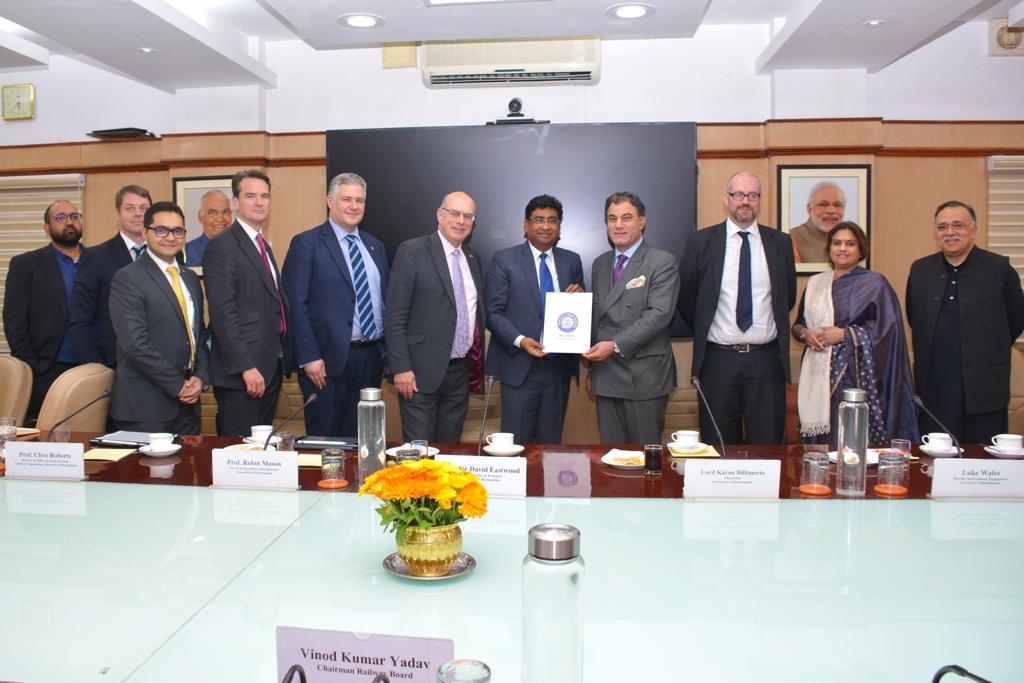 Railway board Chairman Vinod Kumar Yadav and Lord Karan Billimoria, Chancellor, University of Birmingham announced the launch of a Joint Masters programme in Railway Systems Engineering and Integration in academic year 2020-2021 by the National Rail Transportation Institute (NRTI). Rajesh Tiwari, Member Traction and other senior officials of Railway Board along with Professor Sir David Eastwood, Vice-chancellor and faculty members of University of Birmingham were present on the occasion.

Vinod Kumar Yadav said it was the dream of Prime Minister Narendra Modi to develop a Railway University which can look into all aspects of transportation. Over the last few years a lot of transformational work has been done by Railways with focus on capacity enhancement and modernisation of Railways. Indian Railways looks forward for a long term association with University of Birmingham.

The programme that has been launched leads to dual M.Sc. that would see NRTI students obtaining two post graduate degrees from both institutions, after spending a year studying at each institution. It will also provide flexibility for some modules of the programme to be delivered online in the form of a Postgraduate Certificate (PG Cert) and support for undergraduate teaching by University of Birmingham faculty at NRTI.

This initiative will benefit NRTI students by providing them access to world class expertise and facilities in railway systems at the Birmingham Centre for Railway Research and Education (BCRRE). BCRRE is also expected to gain valuable insights into India’s transport sector and get involved in related research and development issues in the country.

The initiative has been taken under the Centre of Excellence for Next Generation Transportation Systems that had been set up by an MoU between the National Rail Transport Institute with the University of Birmingham on December 18th, 2019.

Earlier during the day faculty from University of Birmingham conducted a workshop on ETCS level 2 signalling which was attended by officials from Railway Board, Northern Railway, Railtel and other Zonal Railways by video link. A significant progress has been made in the research project on the analysis of line capacity improvement with ETCS level 2 on the Jhansi Bina Section of the North Central Railway. This would be first formal project under the MoU which will develop a combined signalling and operations-based simulation of the Jhansi Bina section of NCR using the Birmingham Railway Simulation Suite .