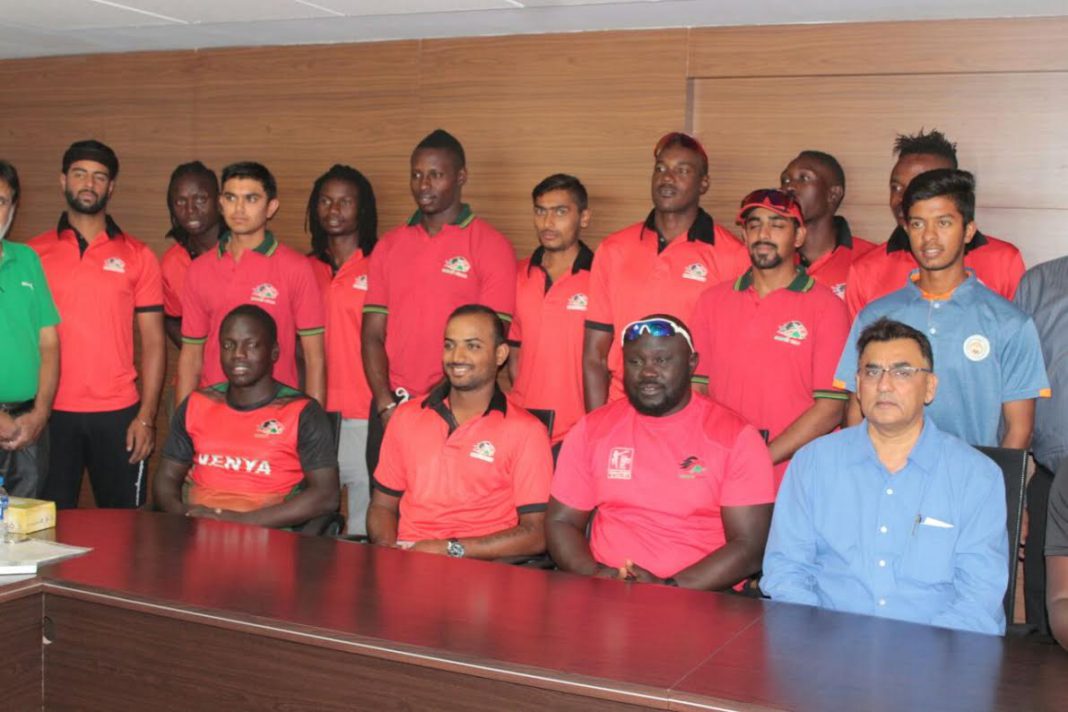 Kenya is a also a cricket crazy country and India is helping the national team. The former Indian cricketers are also give coaching to the team there. In coming days world cup qualifying rounds will be played in Nepal and the Kenya team reached India for the practice matches.

The team is in Vadodara and already played two practice matches and now play two more with Senior cricketers and Baroda Ranji team in coming days.

Felicitation was held for Ninad Rathwa – Nominated for the M A Chindambaram Trophy for the highest Wicket taker in the Cooch Behar Trophy Tournament, Under 19 conducted by BCCI for the season 2015-16.

Ninad played 8 games, 13 innings & took 63 wickets at an average of 18.70 runs per wicket besides scoring 255 runs with 68 noy out as his highest and taking 4 catches and getting 2 run outs.

Ninad Rathwa was presented a bouquet by Thomos Odoyo – Coach of Kenya Team. Minad Rathwa took 12 and 10 in two matches of Cooch Behar as his best performance. He is inspired by Ravindra Jadeja of Indian Team and All rounder Irfan Pathan of Baroda Team.

Baroda Team was led by Yusuf Pathan & Mukesh Narula was the Coach. This team played few games in a triangular tournament with Kenya team and Gujarat Cricket Association Ranji side. The result/ outcome of the tour was very positive and gained dividend that season.

Baroda Team became Ranji Trophy Runners up, Losing to Rajasthan in the Ranji Finals at home, also the team became All India Champion by winning the Saiyed Mustak Ali T -20 Championship. Also BCA came out with flying colors in the C K Nayudu Under 22 Tournament that year.

As a reciprocal arrangement, Kenya Team toured Ahmedabad and Vadodara after couple of months as a preparation for the World Cup and their team also performed excellently well.

BCA took the opportunity and after seeking permission of Prof Ratnakar Shetty & Dr. Sridhar at BCCI, organized four competitive matches. Also the Indian High Commission in Kenya called and requested Prof Shetty for a gud conduct of the game and to take care of the well being of the team. On receipt of a Call from Prof Shetty, BCA has tried its best to make their stay comfortable and try to give best facilities possible.

04. On 8 th March – Kenya Team plays against Ranji Main Team of BCA
Kenya Team leaves for Nepal after the game on 8 th to play 2 matches against Nepal team for the ICC qualifying rounds.

There are Developments for the Baroda Cricket First is BCA Senior Ranji Team has won 4 out of 5 games at Delhi in the 50 Overs – Vijay Hazare Group A matches and have qualified for the Knock Out games at Delhi starting from 13 th March. BCA still has to play one game more, the sixth game on 6 th March, tomorrow.

With this All the teams of BCA has done exceedingly well this year. Each age group team has qualified for the Knock Out Tournament in atleast one tournament in that age group of BCA.

Secondly Kenya Team is keen to further initiate a Reciprocal arrangement with BCA for 1 to 3 years, as done previously.

On their return to Kenya from Nepal, they will initiate a correspondence with BCA to initiate a tie up, where BCA team can visit Kenya in Sept/ Oct to play practice matches and in return Kenay team will visit Baroda by the end of the year. On receipt of the communication from Kenya Cricket Board, we will present it to BCA Managing Commit for necessary permission & procedure.