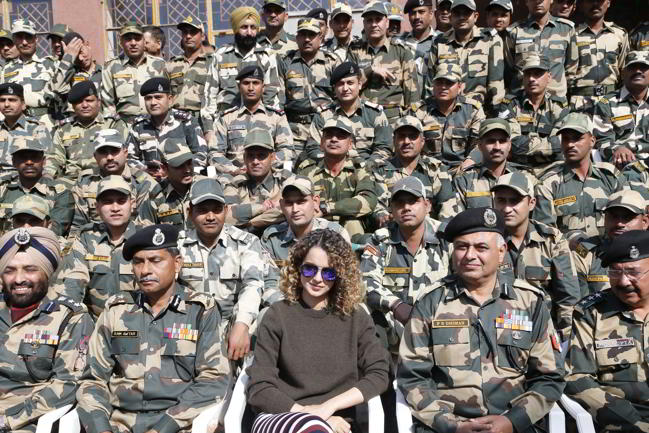 Kangana Ranaut is busy in her upcoming film promotion these days and in this series she was in Jammu on Tuesday.

She spend the whole day with the Jawans and interacted with them and celebrated. Her upcoming film Rangoon will be released soon which is based on the time of 1940, World War Second with a essence of British era. The film feel about the vintage era and to spread it Kangana started the journey from Mumbai in a vintage car.

Kangana reached Jammu at 9.30 in the morning and the BSF Jawans welcomed her with great enthusiasm. The BSF band plays the music in her honour and the BSF officers and their family welcomed her. After that Kangana was taken to the BSF camp in a Gypsy and there she spend much time between the BSF school students. She interacted with the students and the students also are happy to be with the beautiful and talented actress.

Kangana then went to Shahid Smarak and paid her respects to the soldiers and salute them who sacrifice their lives for the nation. Later she met the BSF Wives Welfare Association where the ladies welcomed her with great enthusiasm. She thanked them as they are the strength of the family who look after the family as the Jawans fight for the nation at border.


After that Kangana reached the place where the show of trailer and songs was organised for Rangoon her upcoming film. Kangana then changed into her character ‘Janbaaz Julia’ and performed on songs Blady Hell, Mere Piya Gaye England and London Thumakda along with the BSF jawans.

The Jawans also give a special performance for Kangana which the later appreciated. One Jawan also sing ‘Ye Ishq Hai’ from the film Rangoon. One Jawan also give pink rose to her as Tuesday was coincidentally Rose day. Kangana also clicked pics with about 300 jawans.

Kangana then reached the BSF camp stadium and interacted with the families of the Jawans. She gave a motivational speech there and thanked everyone for their love.

She then head to the officer institute and had lunch with the Jawans and their wives. She interacted with them and later clicked pics once again with the armed forces. The Jawans then dropped her back at the airport.

Rangoon is a intense period drama with Saif Ali Khan, Kangana Ranaut and Shahid Kapoor in main leads. The film is directed by Vishal Bhardwaj and produced under Nadiadwala Grandson Entertainment banner by Sajid Nadiadwala and Viacom 18 Motion pictures. The film is releasing on 24 February 2017.