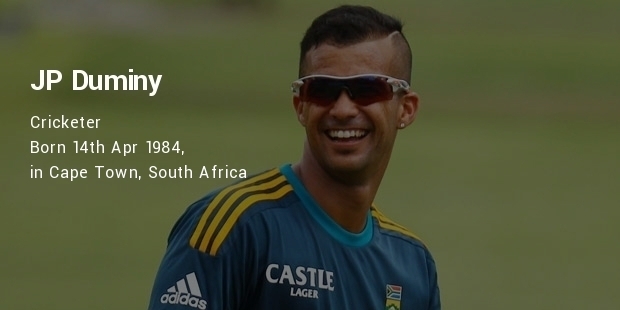 South African batsman JP Duminy announces retirement from Test and first-class cricket with immediate effect. The 33 year old south paw was dropped from the squad after the Lord’s test in July and since then he has not featured in the test side. On Saturday September 16 a Cricket South Africa media release confirmed that.

Jean Paul Duminy, known as JP Duminy, was born on 14 April 1984 and is an international South African cricketer. He is a left-handed batsman and a part- time right-arm off spin bowler. Duminy is currently playing domestic cricket for his home team, the Cape Cobras and also is the captain of Delhi Daredevils in the IPL cricket.

Duminy, made his Test debut against Australia in 2008 in Perth. He finished with 2103 runs from 46 Tests at an average of 32.85. He decides and will continue to play one-day and T20 cricket for both South Africa and the Cape Cobras. He also will be leading the Cape Town Knight Riders in the inaugural T20 Global League later in the year.

Duminy is a successful batsman strengthening the batting order of the South African team. A skilled fielder and a useful change bowler he is the important part of the team. He came to limelight during the South African under-19s tour to England in 2003 and in the 2003–04 domestic season, where he averaged over 72, two years after breaking into South Africa’s Western Province side.

Though he bowls less frequently in One Day Internationals, but found success with the ball, making his ODI debut in 2004 against Sri Lanka.