Well known poet, lyricist Javed Akhtar and former Aviation minister Praful Patel are in Vadodara to deliver lectures on the topic of Young Gujarat at the medical Auditorium in Vadodara. Both of them give inspirational speech before the audience eagerly waiting for them and also put focus on current issues. To wrap it all they […] 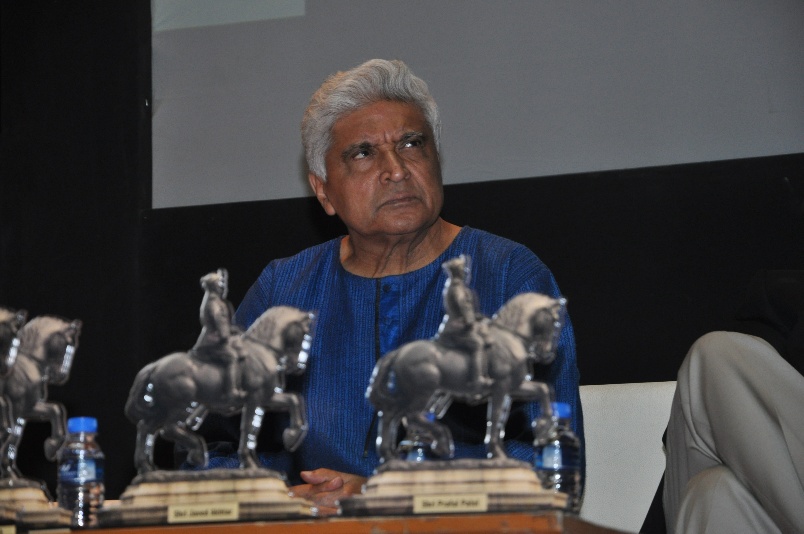 Well known poet, lyricist Javed Akhtar and former Aviation minister Praful Patel are in Vadodara to deliver lectures on the topic of Young Gujarat at the medical Auditorium in Vadodara. Both of them give inspirational speech before the audience eagerly waiting for them and also put focus on current issues. To wrap it all they answer the questions asked to them by the audience.

Javed Akhtar said that last 50 years the we have done a lot and the biggest achievement is democracy and that we have to proud of it. The freedom of expression, freedom of speech, right to vote is some of the finest contribution to the world by our country. He said the technology is growing rapidly and very fast and we can go further with this type of talent in India that we are having. There is excellence of technology in India but what we are left behind is the culture, the sanskar, mythology and specially the roots.

Today the education is also differ as the rich went to big schools and learn English and I think everyone should learn it as an International language. The poorest kid is sending to the vernacular schools and they are learning local languages and taught the values and history of cultures. The thing is that somewhere we are developing branches and somewhere we are developing roots. But we have to develop the branches and spread them then the root itself will become strong. That means the students learn both the languages International and local. The education must be common to everyone.

Akhtar said that where ever he goes he asked the people are you Indian and they shouted in excitement and saying yes. Akhtar said that but he always think that the people don’t like Indian food, Indian dress, Indian languages and then how can they love India. He said and requested the parents to make their children know both the languages and don’t left their mother tongue. He added that everyone should have to be rooted as India lives in Indian land and not in political parties. He said the young people in India are the power of India and they are the one who take this country forward. India is one and states are the different parts which can grow together. He said here the elite class is always visible and the poor are the neglected. In today’s hindi films the heros are shown as elite people in comparison to the earlier films where the hero comes from working class.

He said the society is divided not in communities but horizontally between rich and poor. The majority the poor is suffering and the minority the rich is having everything.

About the Fatva to a 10 year old he said there is nothing like Fatva and it’s have no value. About his social media updates he said he is doing it as a freedom of expression and both Hindu and Muslim fundamentalists accused him which shows he is true.

Finally about the Padmavati film agitation he said it’s wrong to protest the film without knowing the story on content inside.

Former aviation minister Praful Patel said that in the last 20 years the technology grew so fast that we have to make pace with. The technology infrastructure everything is changing and we also have to change as nation and governance. He said it’s easy to say anything but very difficult to execute. We as a country have to think different and grow.

Talking about young Gujarat he said 60% of engineering pass outs didn’t get jobs in Gujarat and unemployment is 75 lakhs in the state. He said talking about development is different thing but the statistics shows us the real picture and we to look to these issues as a whole.

After the event Praful Patel said that he is specially concentrating on NCP growth in Gujarat and himself monitoring the proceedings. He said the NCP will fight on its own in the upcoming elections in Gujarat and tight lipped about the coalition. He only said that his target is to strengthen the party in Gujarat.

About Yogi Adityanath as the next CM of UP he said that Sushasan and Vikas is not comply with the name and he believe the descision is taken in pressure.