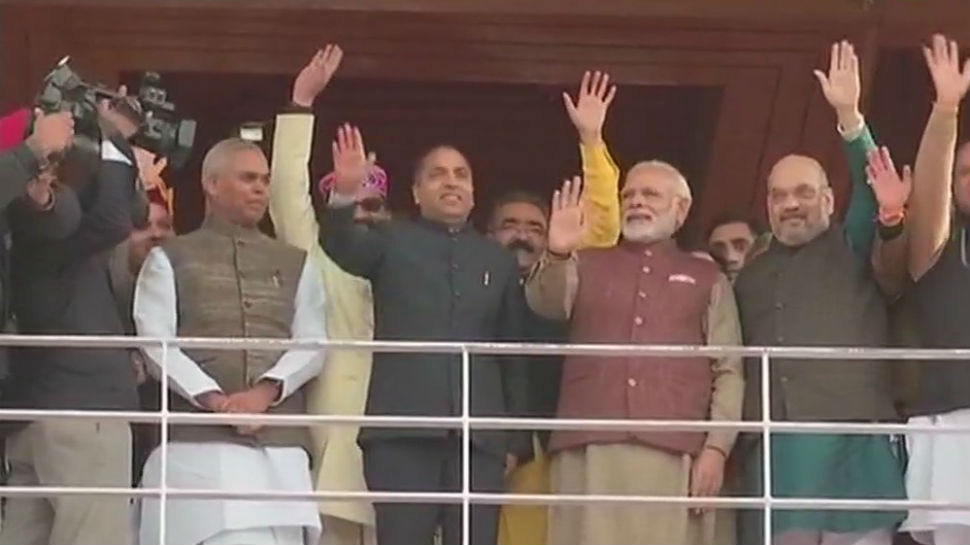 Jai Ram Thakur was today sworn in as the 14th chief minister of Himachal Pradesh along with 11 other ministers at a ceremony at the historic Ridge Ground here.

Governor Acharya Devvrat administered the oath of office and secrecy to the 52-year-old Thakur, a five-time MLA from Seraj, and other ministers which included six new faces.

The cabinet is complete as all 12 berths have been filled while two MLAs would be accommodated as speaker and deputy speaker.

Rajiv Bindal will be the speaker of the legislative assembly.

Suresh Bharadwaj and Gobind Singh Thakur took oath in Sanskrit while the others took oath in Hindi. Sarveen Chaudhry is the lone woman in the cabinet.

Besides, the chief minister, two ministers are from his home district of Mandi, four from the largest Kangra district, one each from Shimla, Solan, Kullu, Una and Lahaul and Spiti districts.

The BJP had won 20 seats in Kangra and Mandi districts and also won 13 out of 17 seats reserved for Scheduled Castes and two out of three Scheduled Tribe seats.

Some senior party leaders and former ministers including Romesh Dhawala and Narinder Bragata have not been given berth in the cabinet.

There are six Rajputs including the chief minister, Mohinder Singh, Vipin Parmar, Virender Kanwar, Gobind Thakur and Vikram Singh, three Brahmins including Suresh Bharadwaj, Anil Sharma and Ram Lal Markanda, who is both tribal and Brahmin and two OBCs.

Sarveen Chowdhary is also a four-time MLA and former minister in the BJP government.

Anil Sharma, who deserted the Congress on the eve of election is four-time MLA from Mandi and served as minister in the Virbhadra Singh cabinet in 1993 and 2012 while Dr Ram Lal Markanda, a three-time MLA was minister in the Dhumal government during 1998-2003.

Suresh Bharadwaj from Shimla is senior party leader and a four-time MLA. He was also Rajya Sabha member and state BJP chief.

The BJP had won 44 out of 68 seats in the state assembly and after the shocking defeat of BJP’s chief minister face Prem Kumar Dhumal from Sujanpur, the race was open for the top post and Jai Ram Thakur was elected leader.

Thousands of people from Mandi, the home district of chief minister thronged the venue and danced to the tunes of traditional folk music.