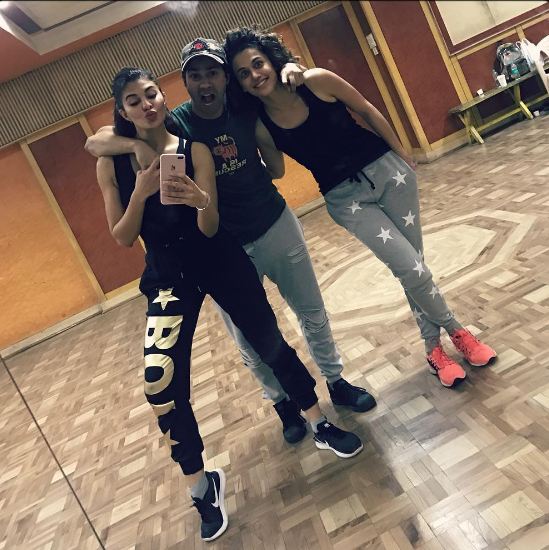 The team of upcoming ‘Judwaa 2’ is busy in shooting of the song. The lead actors Varrrun Dhawan, Jacqueline Fernandez and Tapsi Pannu are seen practicing for the song. All the three actors are undoubtedly put in efforts for the 1997 blockbuster Judwaa dance number Tan Tana Tan which became a blockbuster at that time.

The actors are ready to rock with the Judwaa 2 song Tan Tana Tan choreographed by Ganesh Acharya. All the three already complete the shooting of the song ‘Unchi Hai Building’ which was a wonderful experience for them.

The actors enjoyed the every moment of shooting the song. Jacqueline also shared a picture where they pose for the camera after the rehearsal. There is a caption also with the picture which read ‘Can you imagine about the song we are practising for?#Judwaa2@varundvn@taapsee

Unchi Hai Building and Tan Tana Tan are the classic numbers from Judwaa relived againg in the sequel Judwaa 2. The actors are presently in Mumbai for the shooting then they will leave for Portugal programme.

The film will slated to be release on 29th September 2017 in cinemas.