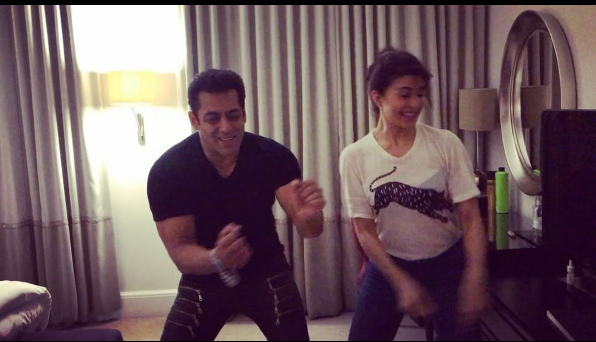 Jacqueline Fernandez started the promotion of her upcoming film Judwaa 2 in a very enthusiastic way. After the press meeting series in Mumbai with her co star Varun Dhawan the actress accompanied Salman Khan for his Dabang tour to Britain.

Jacqueline post a video in Instagram where she along with Salman Khan is shaking legs on the song Chali hai kya 9 se 12. Both of them shared a wonderful chemistry in the video.

Sajid Nadiadwala’s ‘Judwaa 2’ is full of action, comedy, drama and romance just like the original one released on 1997. The film kept the audience expectations intact with its songs and trailer. The audience are eager to see the sequel of the classic and expectations are at all time high.

The trailer of the film takes you to the roller coaster ride of entertainment and the dialogues make you laugh with your hearts out. The songs Chalti Hai Kya 9 se 12, Suno Ganpati Bappa Morya and Oonchi Hai Building increased the expectations of the audience. The fourth song ‘Aa To Sahi’ will also make everyone expectations high like the earlier ones.

The film is the new version of 1997 Salman Khan starrer Judwaa which is all time favourites among the people. The audience are eager to see the new twist in the evergreen hit of the 90’s. The film will release on 29thSeptember in cinemas.