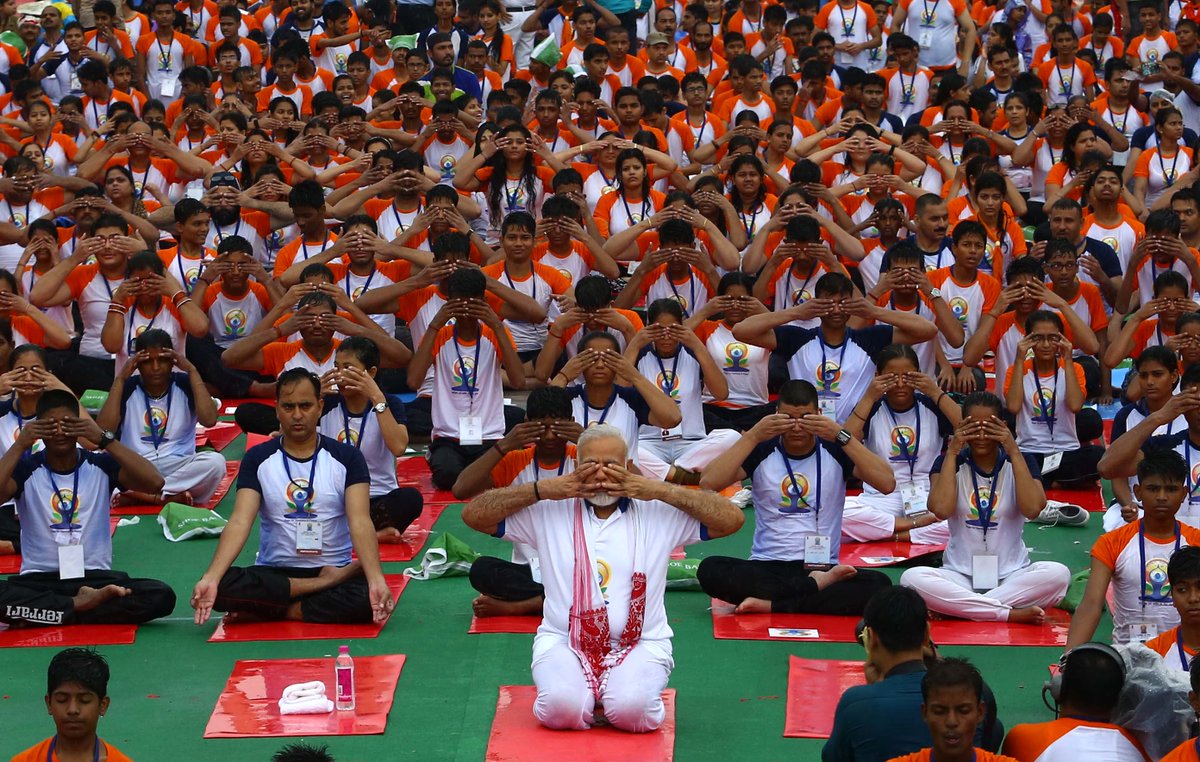 For about 20 minutes this morning, Modi performed yoga asanas in the rain at Lucknow's Ambedkar Sabha Sthal, leading thousands of people in celebrating Yoga Day. In Ahmedabad, where Ramdev and BJP chief Amit Shah led celebrations, about 5 lakh people turned up to do yoga at 5.30 in the morning.. Events are being held in 180 nations across the world today.

Dressed in a white T-shirt and loose white trousers, Narendra Modi shared the stage in Lucknow with Uttar Pradesh chief minister Yogi Adityanath, who too performed yoga in the light drizzle.

"I welcome all yoga lovers present here and those performing yoga in various corners of the world. Today, yoga has become a part of so many lives. Yoga's popularity out of India is high and it has connected the world with India," PM Modi said.

“Many countries which do not know our language, tradition, or culture, are now connecting to India through Yoga. The practice, which connects body, mind and soul, has played a big role in binding the world too,” he said.

“Earlier, Yoga was only restricted to saints and seers in the Himalayan mountains. Now, it has become part of every person’s life,” he said in his address. He also asserted that attaining “wellness” through yoga was more important than simply being physically fit.

“It is not important to perform yoga for 24 hours. 50 or 60 minutes (is fine) because it lends harmony to the body, mind and intellect. If 1.25 billion Indians and people around the world can attain this state of well-being, then humankind can also tide over problems born out of human thoughts,” he said.

He also explained the importance of Yoga using an analogy of salt.

“Just as the importance of salt is not only to lend taste to food, but also ensure well-being of the body, similarly Yoga can have the same importance as salt has in life,” he said.

He said yoga is about health assurance. “It is not even expensive to practice,” he said.

“I urge everyone to make yoga a part of their lives,” he said, adding that he was glad to see several yoga institutes take shape over the last three years.

The Prime Minister who participated in celebrations in Delhi in 2015 and Chandigarh in 2016 has appealed to three generations of families to perform Yoga together, take a picture and upload it online.

It rained in Delhi too this morning, as thousands gathered clutching umbrellas or wrapped in raincoats to do yoga. In Lucknow, people were seen using yoga mats as umbrellas and raincoats as yoga mats.

Other senior union ministers led yoga sessions in different parts of the country.

In Ladakh, jawans of the Indo-Tibetan Border Police performed a yoga session at 18,000 feet and a temperature of minus 25 degrees Celsius.

Officers of the Indian Navy held yoga events on board the aircraft carrier INS Vikramaditya and at the naval dockyard in Mumbai.