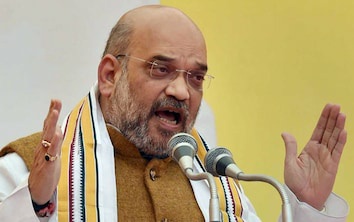 BJP party president Amit Shah on Saturday addressed a rally in Uttarakhand. He spoke about the Interim Budget which was announced on Friday as well as Rahul Gandhi’s reaction to it. He also talked about what the BJP plans to do if it comes to power in the forthcoming general elections.

Amit Shah said that delivering the Interim Budget has been the biggest achievement since India got freedom. He also said that since the budget was announced, the light went out of Rahul Gandhi’s face. “Budget ke baad vipaksh ke adhyaksh ke chehre se noor gayab ho hogaya tha.

Amit Shah highlighted the BJP’s achievements in the past years. He said that the party had started work on the all-weather road which is being built using the latest technology available.

Amit Shah criticised the Congress and said that for 55 years the party was in power but failed to deliver the One Rank One Pension (OROP). It was the Modi government which delivered its promise, he said. He further mocked the Congress party and reiterated his previous statement that the party’s OROP stands for ‘Only Rahul, only Priyanka’.