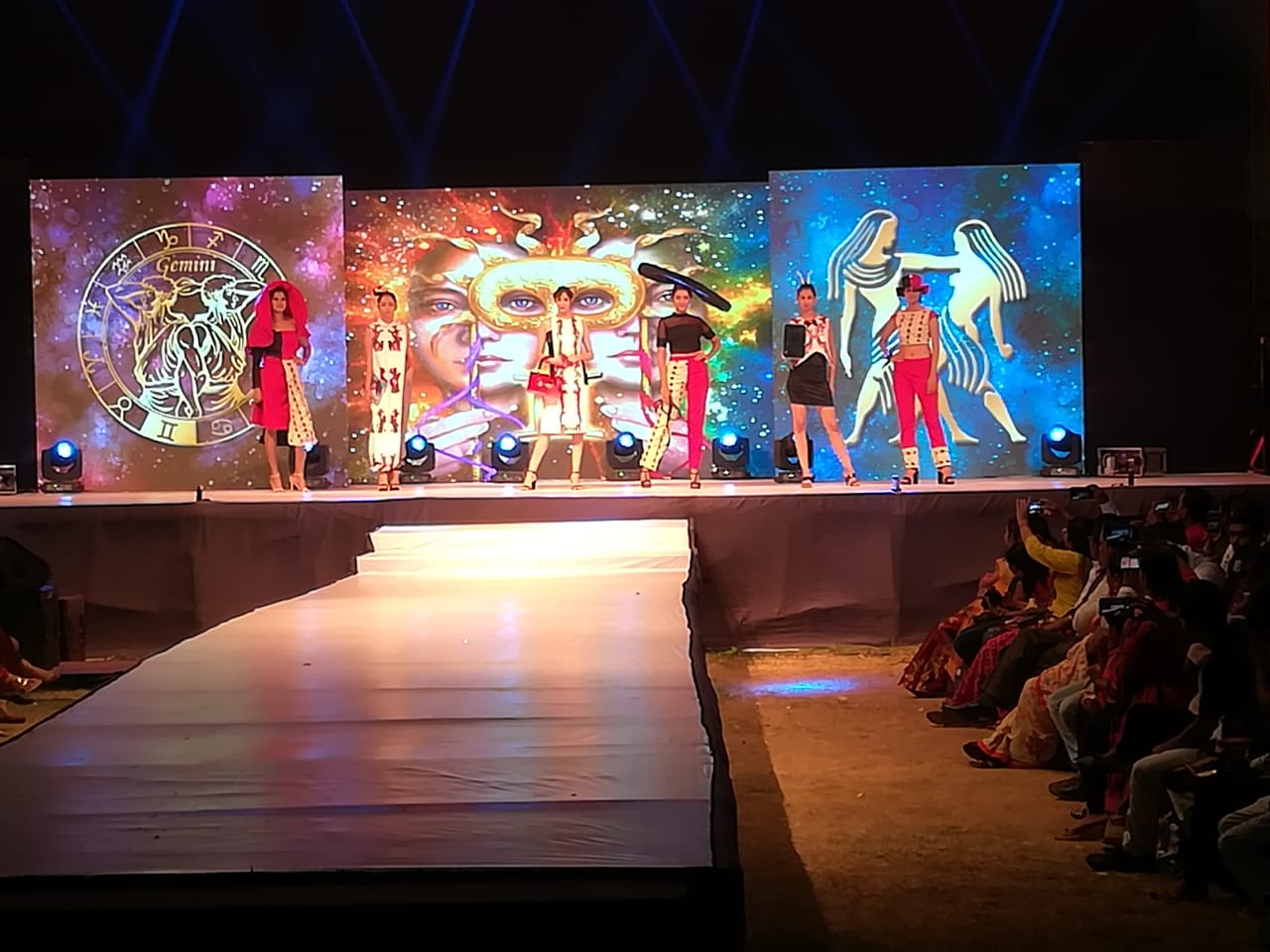 Students of Inter National Institute of Fashion Design (INIFD) Vadodara present their designs in this year's annual fashion show based on Zodiac signs. Top models from Mumbai walk the ramp wearing the designer clothes and mesmerise the audience. The show started with a prayer and two minutes silence for the victims of Surat fire tragedy.

Every year the students of INIFD design the clothes taking inspiration from various subjects. This year they have studied the zodiac signs and understand the driving force behind their thoughts and actions.

The show ZODIAC takes the audience deep into the stars to be one with the many zodiac constellations. The ANGER of Aries, learning of vedic astrology , the protectiveness of Cancer , the life of Aphrodite, Shivas Tandav and also the climatic effects on our planet.

Various forms of Painting, Creative Embroidery, Burning, and Innovative tailoring techniques have all gone into making the fabulous collections.

The first sequence showcase the designs by KRUPA MARU based on zodiac sign Gemini. The zodiac sign symbolized by twins has been represented here through the technique of ink blotting to show the dual nature of a Gemini. The duality also represents exchange and interaction. This was the inspiration for the technique where a drop of ink is shared between two folds of a single fabric to achieve a mirrored look.

MANSA KANSARA : The Tarot card for Leo is “STRENGTH” as also emphasized by the symbol of the Lion. The designer decided to focus on the quality of Inner strength of a person. The innate strength of a fibre is the technique through which Inner Strength has been represented. The technique showcases strength by the creation of cuts in the fabric where even after the cuts the integrity of the fabric remains the same.

Sequence 2 by VIMAL LALCHANDANI about the Tarot card for Scorpio is the card of Death. The designer elected to showcase the positivity inherent in him and has portrayed death as the light at the end of the tunnel. The Scorpio sign falls under the element of water and this has been represented in the pleated fabric element of this collection. Metals – Iron and Steel, and the colors Red, Black and grey that are considered auspicious for the Scorpio sign have also been represented in this collection.

ANEJA SOLANKI : The next collection represents the designers own hope to conquer one of the main attributes of the Aries sign – ANGER. She has studied the Aries sign under Greek mythology and used the Greek God of War – Ares, as her muse for this enthralling collection.

Black indicates power and strength while Red signifies anger, danger, passion and lust ; the many attributes of Aries. The aggression of this sign is highlighted by the use of spikes and the pleating technique showcases the designers attempt to hold in and curb the natural impulses of an Aries that lean towards negativity and anger.

Sequence 3 by Kumkum Bodhwani of zodiac sign Pisces. The designer studied her sign under Vedic astrology. The designer has used weaving technique to create alphabets relevant to Pisces or Meenrashi. The colour Yellow comes from the stone Yellow Sapphire. Blue represents water.

Lord Vishnu is said to have been incarnated in the fish form and that is shown through a beautifully hand-painted cape. The two fishes symbolize all that is both positive and negative in our personalities and our lives.

Sarika Gosavi : This collection is influenced by the three zodiac signs of Gemini, Libra and Aquarius that come under the element of AIR. The silhouette and fabric of the garments represent the fluidity and etherealness of air. Blues and whites also bring the reference to mind and the metal ring technique reminds one of the basic human need to have access to fresh, clean, crisp air.

Sequence 4 by Janvi Panwala is the colour considered most auspicious for Capricorns is brown and that made the designer select hot chocolate as her inspiration for this collection. The luxury and fluidity associated with chocolate along with the colours ranging from creamy milk chocolate to the bitter dark brown form the basis of the collection.

Basket weave technique along with couture inspired collars and sleeves create the stunning garments that enthrall one and all.

Vaivhavi/Janvi/Priyanka : This trio of designers have represented the signs Taurus, Capricorn and the Water element respectively. The artistic side of Taurus is represented through the twisted pleat technique. Earthy colours and the hand embroidery technique of Baro display the Capricorn attributes. The flow of water is depicted in the last garment and the connection to water element is highlighted through the use of its symbol – the triangle.

Sequence 5 by Anku Bose & Minal Gupta the designer duo teamed up to create a collection based on their individual signs of Libra and Taurus. Both were inspired by Earth where the balance of Libra is the star of one collection, the interconnectedness found in nature is depicted through the knotting technique used in the Taurus collection. Florals juxtaposed against blocks of colour bring the two collections together.

Sequence 6 by DHANASHREE HAMINE is Taffeta and Gajji silk in hues of blue form the next collection. Based on the Sagittarius trait of being intrepid explorers these garments reflect the blues of the ocean and the silhouettes reference resort wear for the modern woman.

SNEHA PARMAR collection based on Cancer, a water sign, is portrayed in this collection along with the ruling planet of cancer - the moon which is represented by the white pearls. The shell of the crab , symbol of cancer , that provides protection to the soft inner body of the crab is depicted through the silver beads encasing the pearls.

Sequence 7 by Rucha is the collection representative of the Kanya raashi or Virgo zodiac. The designer chose to create garments that celebrate the diva in every woman. Luxurious fabrics such as velvet, sequins, silks , net form the basis of the collection. A spectrum of green celebrates the connection of the sign Virgo to the element Earth as also its birthstone - the emerald.

Dhara collection is balance is what the Libra sign is all about and this sequence celebrates the opposing forms of balance , both symmetrical and assymetrical. The garments are inspired by “Themis” also called “lady of justice” in Greek, by the concept of Yin and Yang that are another way of understanding balance and also by the constellation. Libra is the only sign that is represented in the constellation by an inanimate object.

Sequence 8 by Ruchita Rangwala represents her Pisces trait of being a dreamer through a fantasy induced collection based on the stories of the Greek goddess Aphrodite, the deity worshipped under the sign of Pisces. From the birth of Aphrodite from Sea foam to her fight to save her son and up until her transformation into a fish during the Trojan war ; this collection takes us on a beautiful journey through the life of a goddess.

Neha Tomar collection is taken up under the mantle of the element Earth. The designer has chosen to allude to the many challenging issues of global climate change such as droughts, Tsunamis and deforestation happening all around us today. Lycra , Gajji and Net fabrics form the basic material palette and various techniques of pleating have added to the drama of this collection.

Sequence 9 by Shivangi Begda collection depicts Shiva is the ruling god of the Aquarius or Shani zodiac under Vedic astrology. The ruling planet is Saturn. Both these deities of Hindu mythology are known as upholders of justice. Lord Shiva is also known for his raging temper. This collection uses leather, Cotton silk, Gajji silk, Tissue and Lycra with techniques of burning , marble dyeing and hand painting to create inspirational designs.

Hiral Parekh : As per Vedic astrology, the reigning deity and planet for the Cancer sign is Chandra dev or the moon. This collection explores Lunar cycles as explained in hindu mythology. Also, stories associated with Chandra Dev such as the Saagar Manthan formed the concepts for this collection. Garments display creative fabric manipulation and hand painting to achieve the desired look.

Sequence 10 by Nisargi is the collection around the zodiac sign Scorpio, the designer was inspired by the Scorpion as depicted through the Ancient Egyptian Civilization.

This collection celebrates the Queens of Egypt. Capes and gowns in black and gold silks finished with innovative smocking techniques help create a collection worthy of royals.

Keval : The twins of Gemini are represented here as the Angel and the Devil. They also represent the two faces of man and the combination of the two covers the two ends of the spectrum of grey that defines humanity. Gorgeous silks, leather and net fabrics in black , white and red along with perfectly executed origami techniques form this gorgeous collection.