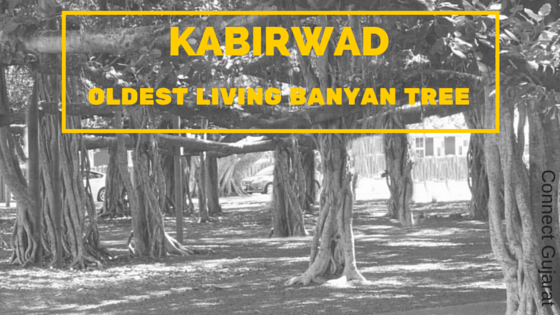 Bharuch: In between route from Surat to Vadodra, about 80 kms from Surat, 16 kms from Bharuch and a km ahead of Shuklatirth, a small signpost guides you to a very interesting and historical island called Kabirvad.

Situated on the banks of the holy river Narmada, it is a religious and a picnic spot. Dedicated to the famed Indian poet-saint Kabir, it is full of Vad trees (Banyan trees) - hence the name, Kabirvad.

District administration has created a boat facility which plies every 20-30 minutes. It takes about 15 minutes for the boat to reach the other side of the river. Kabirvad is spreaded in an area of approximately one km, it’s probably the only place within India to boast of such a vast expanse of banyan trees - all having originated from a single trunk. The main trunk’s aerial roots over the years grew laterally into thick woody trunks and have now become completely indistinguishable from the main trunk. The mother tree is believed to be over 600 years old.

According to the locals, once Saint Kabir had planted a Datun the same twig took the form of a huge Vad tree (mother trunk) which later gave rise to the adjoining ones.

One of another senior citizen said, “Saint Kabir had meditated under the Banyan tree during one of his pilgrimage trips. That tree never aged and subsequently multiplied in number.”

There is a small museum in the premises which gives a bit of insight of this astonishing place. There is also a beautiful lotus shaped temple which houses an idol of the great saint Kabir Das.

Recently government of Gujarat has announced an extreme makeover of the place and while talking regarding same Bharuch district collector Dr Vikrant Pandey said, “We have very exclusive plans to develop the island and the near about river bank as well as places, we have already proposed a development plan to the government and positive talks are assumed.”