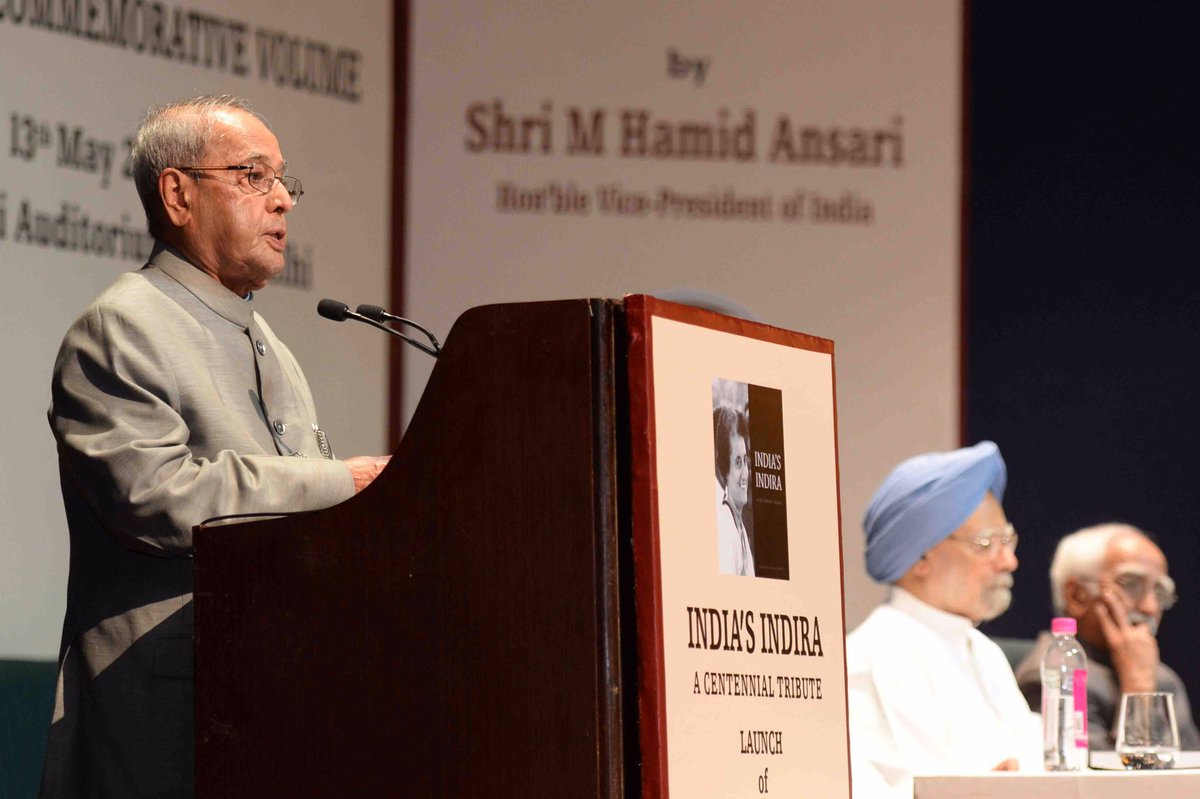 President Pranab Mukherjee on Saturday said Indira Gandhi was still the "most acceptable ruler" of the country and hailed the late Prime Minister for her decisiveness and fearlessness.

"To the people of India, she is the most acceptable ruler of a democratic country, even today," Mukherjee said at the launch of the book "India's Indira - A Centennial Tribute" during her birth centenary year. "She remained undaunted in the face of attacks and criticism. She never lost courage. If the Congress party came back into power within a short period of three years, it was because of Gandhi's hard work and determined action," said Mukherjee at the event attended by Vice President Hamid Ansari, former Prime Minister Manmohan Singh and Congress Vice President Rahul Gandhi among others.

"When Congress was defeated in 1977, when I met her, the first thing she told me was 'Pranab, don't get unnerved by the defeat. This is the time to act. And she acted," he said.

The President, who had served as a minister in her cabinet, said that she had "waged a relentless war against communal and sectarian violence, throughout her life" while successfully rising above "divisive identities of caste, community, religion and creed and established a direct connect with people".

"It was this unhindered rapport that made her acceptable from Kashmir to Kanyakumari and Mizoram to Dwarka. She had only one identity - that of an Indian," said the President. He said that Indira Gandhi's life was infused with a tremendous passion for India and its people, and hailed her contributions towards the progress and development of India.

About Indira Gandhi's decisiveness, Mukherjee referred to several of her bold decisions including the Operation Blue Star the 1984 military operation to remove Sikh militants from the Golden Temple in Punjab.

"Sometimes history demands some action which may not prove correct later on, but perhaps is most relevant at that time," he said.

"Fearlessness in action and boldness in decision making was the unique hallmark of her character," said Mukherjee who was presented the first copy of the book edited by senior Congress leader Anand Sharma. "It was in Indiraji's time that India became the third largest reservoir of skilled scientific and technical manpower, the fifth military power, the sixth member of the nuclear club, the seventh in the race for space and the tenth industrial power," he said.Gandhi was Prime Minister from 1966 to 1977 and then from 1980 to 1984 when she was assassinated.