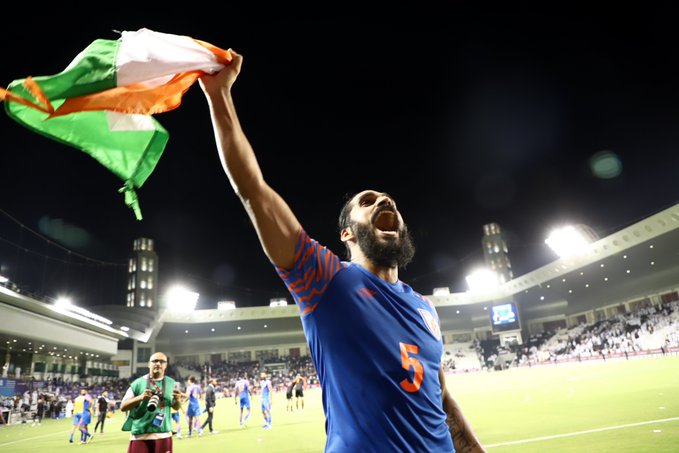 The Jassim Bin Hamad Stadium witnessed a sea of blue as fans turned up the supportive level and were not left disappointed by the Indian team, who  performed to earn a historic 0-0 draw against Asian champions Qatar.

Qatar were playing at home but it was the Indian football team which was made to feel like the hosts thanks to the fans who turned up in huge numbers to support the Blue Tigers in their FIFA World Cup Qatar 2022 and AFC Asian Cup China 2023 joint qualifiers Round 2 match in Doha on Tuesday.

India’s stand-in captain Gurpreet Singh Sandhu, who was leading the team in the absence of an unwell Sunil Chhetri, even went on to say that his team was made to feel at home by the fans and thanked them for cheering for the players throughout the match.

“It was like playing at home away from home. The support was incredible. They spurred us on, cheering us all throughout,” Gurpreet said.

MASSIVE SHOUTOUT💥 to all the fans at the stadium🏟 and to the ones that supported us from back at home🙇🏽‍♂️🙌🏽
💙#BackTheBlue💙#QATIND ⚔ #WCQ 🌏🏆 #BlueTigers 🐯 #IndianFootball ⚽ pic.twitter.com/fhOT622KNG

After the match the Indian football team members made sure to thank their fans in their own style as they brought out the Viking thunderclap celebration.

The fans also joined in as Gurpreet and defender Sandesh Jhinghan brought the players on the sidelines of the pitch and started the Viking thunderclap.

India, who had suffered a heartbreaking 1-2 loss to Oman in their opening match on September 5 in Guwahati, now have one point from two matches while Qatar have four points as they had beaten Afghanistan 6-0 in their first match here.

The two sides had played just one official senior match before Tuesday and Qatar had won 6-0 in September 2007 in the 2010 World Cup qualifiers.

India’s next play against Bangladesh will be on October 15 in Kolkata.