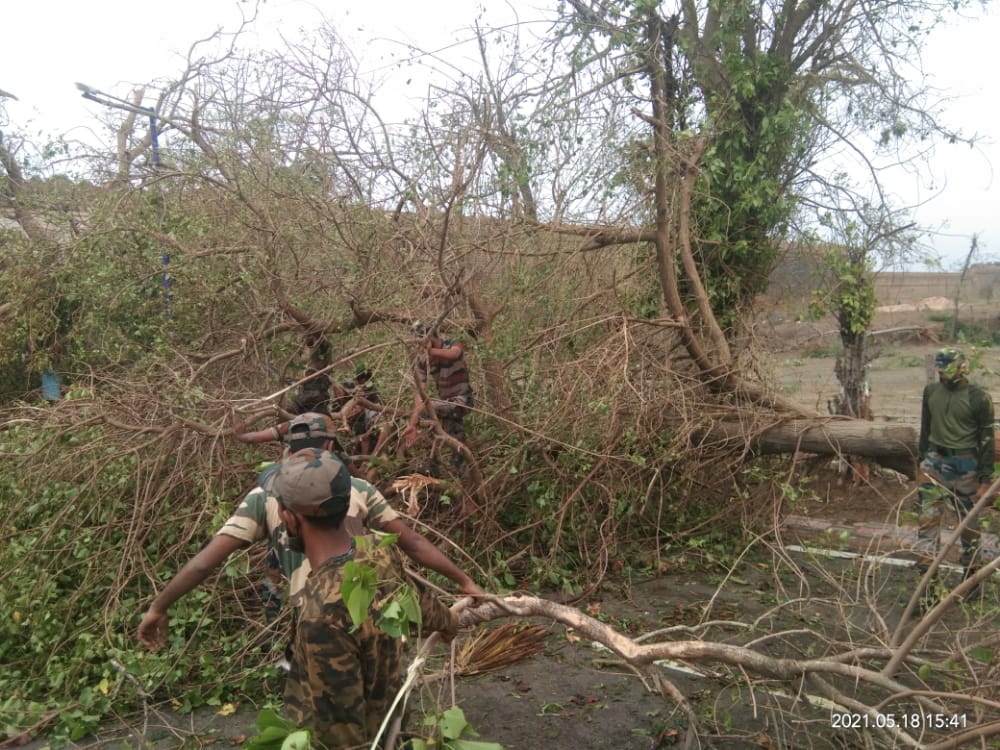 The Army teams in close sync with civil administration are leaving no stone unturned in reaching out to the civilian populace. The Army columns cleared the road for move of essential supplies and civil vehicles between Somnath and Diu braving high velocity winds and debris during the hours of darkness.

Lieutenant General PS Minhas, General Officer Commanding, Konark Corps is maintaining a close watch over the situation. He exhorted the troops to put in their best to overcome this challenge in an already difficult COVID time. The requirement of aid in terms of evacuation of population, provision of fresh water, food, medicine and camping areas/ shelters have been catered by the Army and it is working round the clock maintaining all the Covid protocols. Connected implications relating to COVID, in respect of shifting patients, immediate medical assistance is also being planned.

Lt Gen JS Nain, GOC-in-C, Southern Command interacted with Praful Patel, Lt Governor of Daman & Diu and Acharya Devvrat, Governor of Gujarat, and assured them of full support to the civil administration by the Southern Army to restore normalcy in the region hit by the devastating Cyclone.

In Diu, Task Force Cdr, alongwith Team Cdrs carried out recce of the Diu and interacted with the DC & SP Diu as well as the NDRF team at Diu.The main tasks identified were, Clearance of Roads for Movement, Clearance of Debris from Houses and Buildings and Providing Med Assistance and any other help required to locals.

The complete area of Diu was divided into three parts i.e. Diu Main, Vanakbara and Ghoghla. Each Area was assigned two Sub Teams each with vehicles and equipments for the task of Clearance of Roads and Clearance of Debris. Chain Saws and Heavy Motor Vehicles with Material Handling Cranes were also divided into the Sub Teams.

The Medical Team alongwith the Medical Officer and the Nursing Assistants has established an Adhoc Medical Camp for the locals who may need medical aid. The Civil Adm has been told to info all locals to avail the facility and the word is being spread by own relief Sub Teams also.

The Teams are facing an uphil task as incessant rains accompanied by high speed winds are compounding the difficulty of relief.

The Army Teams are however, dedicated and will be working round the clock to provide any assistance whatsoever required by the people of Diu in rebuilding the devastation caused by cyclone Tauktae.