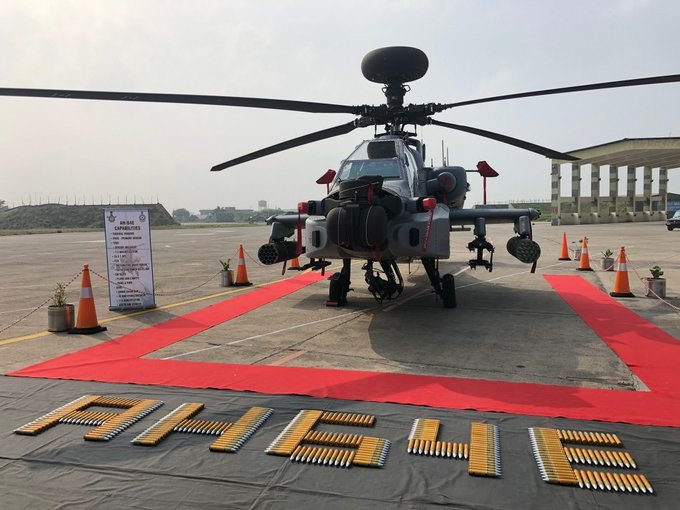 The Indian Air Force on Tuesday(Today) morning inducted 8 Apache helicopters at the Pathankot airbase. The eight fresh US-made Apache AH-64E attack helicopters will give a major boost to the Air Force’s combat powers.

India is said to be the “14th nation” in the world to be operating the Apache attack helicopters.

IAF spokesperson Anupam Banerjee said, “It is a ceremonial induction of the aircraft into IAF. As of now, we have 8 aircraft. 22 aircraft will come in framed manner and all will be inducted into the IAF. We had attack helicopters earlier, but this aircraft brings in deadly firepower with great accuracy.”

The AH-64E Apache is one of the world’s most advanced multi-role combat helicopters and is flown by the US Army.

The Apache attack helicopters were given a water salute at the airbase ahead of the induction.

IAF chief Dhanoa said, “The Apache helicopters have been modified according to the needs of the IAF. We are very happy with the scheduled delivery of the helicopters.”

The IAF had signed a multi-billion dollar contract with the US government and Boeing Ltd in September 2015 for 22 Apache helicopters.

The first four of the 22 helicopters was handed over to the air force by Boeing on July 27.

The delivery of the first batch of Apache helicopters to the IAF at the Hindan air base had come nearly four years after a multi-billion dollar deal for the choppers was sealed.

Additionally, the Defence Ministry in 2017 approved the procurement of six Apache helicopters along with weapons systems from Boeing at a cost of Rs 4,168 crore for the Army.

This will be its first fleet of attack choppers. By 2020, the IAF will operate a fleet of 22 Apaches. These first deliveries were ahead of schedule.

Senior IAF officials said the addition of the Apache fleet will significantly enhance the force’s combat capabilities as the chopper has been customized to suit IAF’s future requirements.

Boeing has delivered more than 2,200 Apaches to customers around the world since the aircraft entered production and India is the 14th nation to select it for its military.