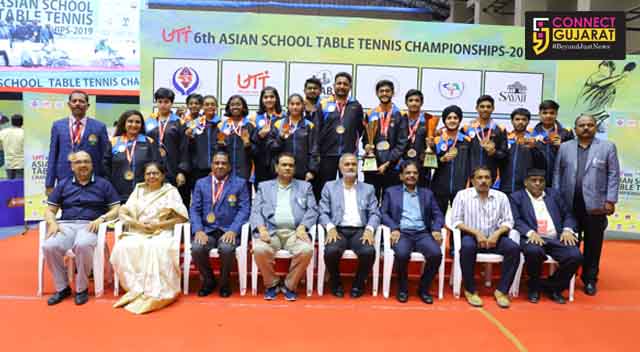 India won 2 silver and 4 Bronze medals in the championship

In girls section China and Hong Kong-China paddlers have dominated the Championship as their players secured their positions in the Girls and Boys Singles finals. Dipanwita Basu from India qualified for second stage in girls singles and lost in quarterfinal against 1-HONG Qinyue (Chn) 1-3. After winning first game 9-11 she lost straight three games 5-11, 3-11, 5-11. Hong Qinyue (Chn) won very comfortably against her.

In boys section, Indian paddler top seed Akash Pal (Ind) beat GALUNG I Made (Ina) in straight set 3-0 in quarterfinal of Boys singles. It was became a major upset when, Chitrax Bhatt (Ind) beat his peers top seed Akash Pal (Ind) in heart thrilling semifinal. It was a match of best of seven games and with the first game both the paddlers from same country were fighting for securing their position in the final. First game was in favour of Akash Pal 12-10, then second game was won by Chitrax Bhatt 17-15. At the end of fourth game, Akash Pal was leading by set score 3-1. In fifth game, Akash Pal was leading by 10-8, however, he lost the game 10-12.

Viewers felt Akash Pal was relaxed at the point of 10-8 leading score and that was the turning point for Chitrax and he took the advantage and continuously trying his best to win the match. Chitrax won sixth game 11-7. It was very heavy sadback for Akash because Chitrax was leading 8-3 and he could make up 8 all, then it became 10 all and at last Chitrax won 12-10. It was a marathon match and there was excellent demonstration of skills and techniques.