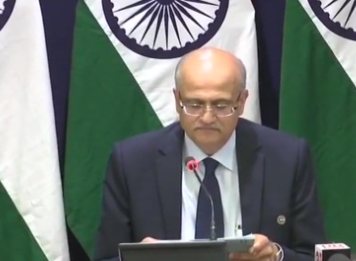 The whole nation wake up on Tuesday with the news of airstrike attack on the terrorists camp. The IAF fighter jets said to be destroy the terror camps across the LOC dropped 1000kg bombs. Foreign Secretary Vijay Gokhale also said a pre-emptive strike became important and India struck the biggest camp of JeM in Balakot later in a press conference.

After the February 14 cowardly attack on the CRPF jawans the whole nation wait for a counter strike and that happened on Tuesday. As per reports the IAF fighters destroyed the biggest terror camps in a Ariel attack early morning today. The reports said the fighters dropped 1000kgs of bombs on the camps of Jaish e Mohammed, Lashkar e Taiba and Hizbul Mujahideen and completely destroyed them. The attack came after the Pulwama attack where over 40 soldiers were killed by a suicide bomber. The Jaish E Mohammad had claimed the responsibility for the attack.

After a high level meeting at PM Narendra Modi residence early in the morning Foreign Secretary Vijay Gokhale briefed the media and said it was a non-military pre-emptive strike.

Foreign Secretary Vijay Gokhale briefs the media in Delhi and said Credible intelligence was received that Jaish-e-Mohammed was attempting another suicide terror attack in various parts of the country & fidayeen jihadis were being trained for this purpose.

“Credible information was received that JeM was attempting other attacks in the country. A pre-emptive strike became important. India struck the biggest camp of JeM in Balakot,” said Gokhale.

Briefing the media he said “In an intelligence lead operation in the early hours today, India struck the biggest training camp of Jaish-e-Mohammed in Balakot. In this operation, a very large number of JeM terrorists, trainers, senior commander & Jihadis were eliminated”.

Foreign Secy says,”This facility in Balakot was headed by Maulana Yusuf Azhar alias Ustad Ghauri, brother in law of JeM Chief Masood Azhar…The selection of the target was also conditioned by our desire to avoid civilian casualty. It’s located in deep forest on a hilltop”

“India is firmly & resolutely committed to taking all measures to fight the menace of terrorism.This non-military pre-emptive action was targeted specifically at JeM camp. The selection of the target was also conditioned by our desire to avoid civilian casualties,” says the Foreign Secretary.