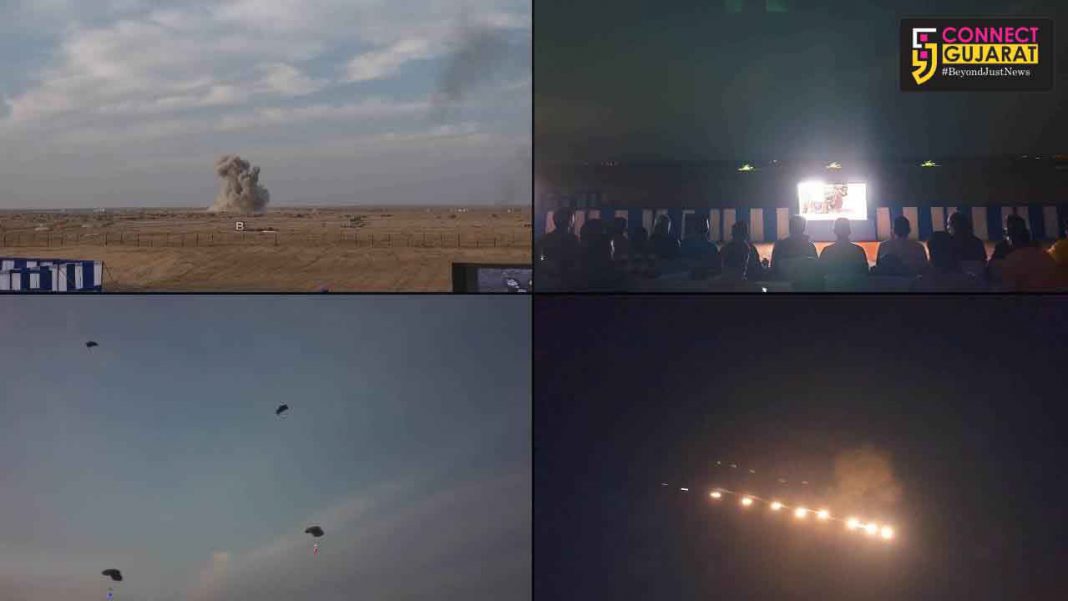 Pokhran range near Jaisalmer reverberated with thunderous explosions and applause as the Indian Air Force put on a well orchestrated and enthralling display of its operational capabilities at Pokharan. The fighters and helicopters show their prowess hitting the targets on the go.

The arrival was followed by the release of a Coffee Table book titled “1971 Indo-Pak War: An Aerial Account’.

As a precursor to the Fire Power Display, three Mi-17 helicopters, flying the National Flag, Air Force ensign and the South Western Air Command ensign, flew past the grand stand. These were followed by a Jaguar aircraft at low level taking images of the grand stand and an exciting supersonic run by a Mig-29 fighter aircraft, which left a loud sonic boom in its wake.

The Chief of the Air Staff, in his opening address, gave an overview of the display and assured the nation of the Indian Air Force’s commitment to national defence and of its capability to thwart any external aggression.

During the Fire Power Display, various simulated enemy targets on ground and in air were targeted and destroyed employing a variety of missiles, precision guided munitions, unguided bombs and rockets by various fighter aircraft of the Indian Air Force that included the Su-BO, Mig-27, Mig-29 upgrade, LCA-Tejas, Mirage-ZOOO, Mig-21 Bison and Hawk, and also the weaponised version of the indigenous Advanced Light Helicopter. Of special note were the precision strikes to destroy Transporter Erector Launchers of enemy surface-to-surface missiles and the swing role capability of the indigenously built Tejas aircraft demonstrated through destruction of an aeriai target with a missile and then a ground target with bombs, in the same sortie.

The setting sun was the harbinger of special heliborne operations that included Bambi bucket ops to put out large fires, and troop insertion by low hover jump and rappelling. Garud Special Forces thereafter gave a scintillating display of anti-insurgency operations in an urban area

This was followed by a flypast by the Airborne Early Warning & Control (AEW&C) aircraft which concluded the day segment of the display.

AS dusk fell the desertscape witnessed paradrop of Garud Special Forces on to the venue from an An-32 aircraft flying high above.

During a short break, the Air Warrior Symphony Orchestra (AWSO) enthralled the audience with its catchy musical performance.

As night descended, the indigenous Surface-to-Air Guided weapon the Akash missile, knocked out a target flying in the sky above. This was followed by Mi-17V5 and Mi-35 helicopters raining rockets on simulated enemy targets. Su-30, Jaguar and Mig-27 upgrade aircraft resumed operations and destroyed the remaining targets with accuracy, displaying the IAF’s operational capability by night. The demonstration was capped with a scintillating display of flare dispensation by an An-32 and a C-130J Hercules aircraft that lit up the night sky.