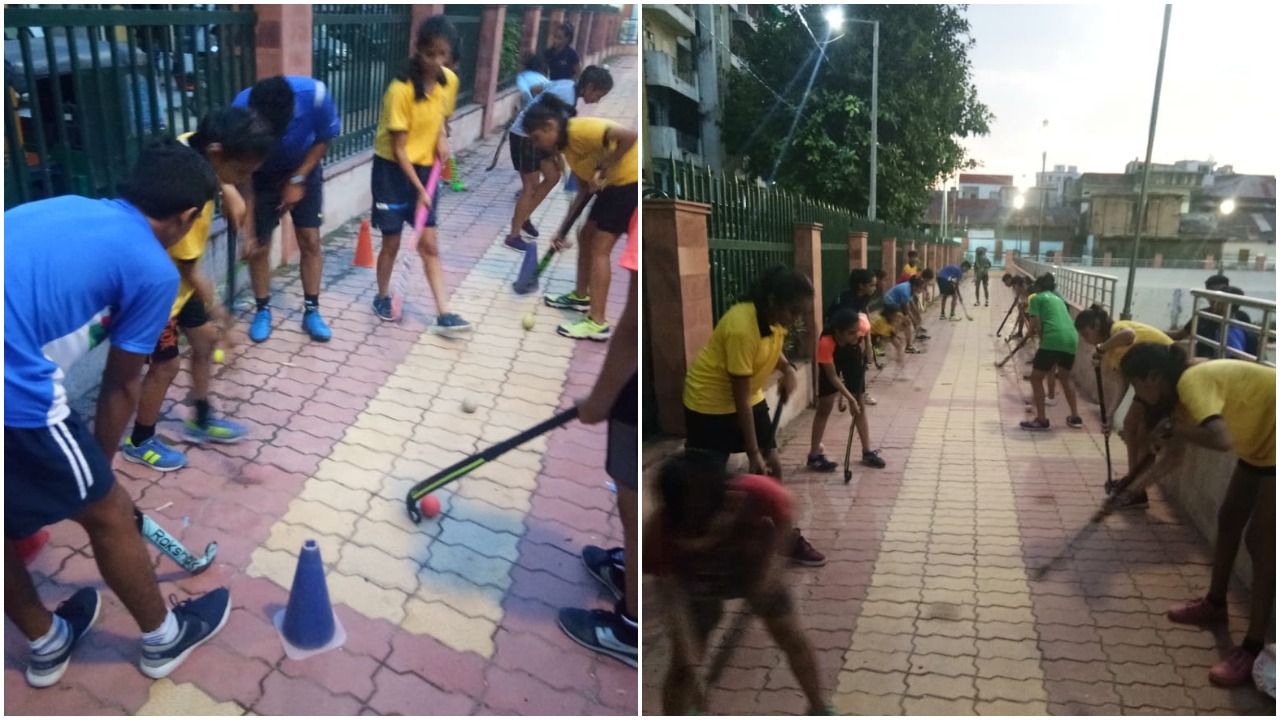 With no proper grounds players forced to practice on the track

As the whole country is celebrating the National Sports Day the birth anniversary of hockey legend Dhyanchand, here is a story from Vadodara which shows the sorry state of upcoming hockey players from the city. With no proper grounds the players are forced to practice on the roadside pavement between the residential area. The corporation sealed the only ground given to them by Maharaja Sayajirao Gaekwad in 1963 in view of commercial taxes.

Vadodara is famous for its heritage and producing world class sportsmen shining at the international level. With two world class sports complexes the city is equipped to organise world class events, recent was 6th Asian School Table Tennis Championship held for the first time in the country.

However the city fails to accommodate even a single ground to its hockey players who are force to practice on the roadside walking track. The district association gives training to the 35 players which includes 17 girls on the track near Siddhnath Talav. The players become a centre of attraction in the area. The only ground they possess at Kalabhavan was sealed by the VMC in view of commercial taxes.

Baroda District Hockey Association secretary Amandeep Singh said the players used to get training in the Kalabhavan ground given by the Gaekwads. However in 2017 Vadodara Municipal Corporation sealed it after imposed commercial tax on it. Now the players are forced to practice on the track as they are not disturbing their schedules.

"We re apply for the file regarding Kalabhavan ground in the government after it get rejected by the concerned officer. We are now planning to meet the CM Vijay Rupani in in personal. I also tweet the matter to Kiren Rijiju Minister of State, Independent Charge of the Ministry of Youth Affairs and Sports, MOS in the Ministry of Minority Affairs Government of India. The players are practicing at the track for six months now and will take part in the state and national tournaments. We are trying our best not to disturb their schedules," said Singh.

They are also not allowed to play hockey at the two stadiums as its under Sports Authority of Gujarat and corporation pays the rent. They approached the VMC for the ground but no positive results comes out in favour.

Sushil Bawnekar senior coach gives training to the players in the track said the VMC body passed a order about zero tax on the Kalabhavan Hockey ground and send the file to the government. However no decision is yet taken by the government in the matter and they are forced to practice on the walking track near Siddhnath Talav. The practice is necessary for the fitness of the players and play the game with ease.

Mayor not pick up the call when we try to call her in this matter.