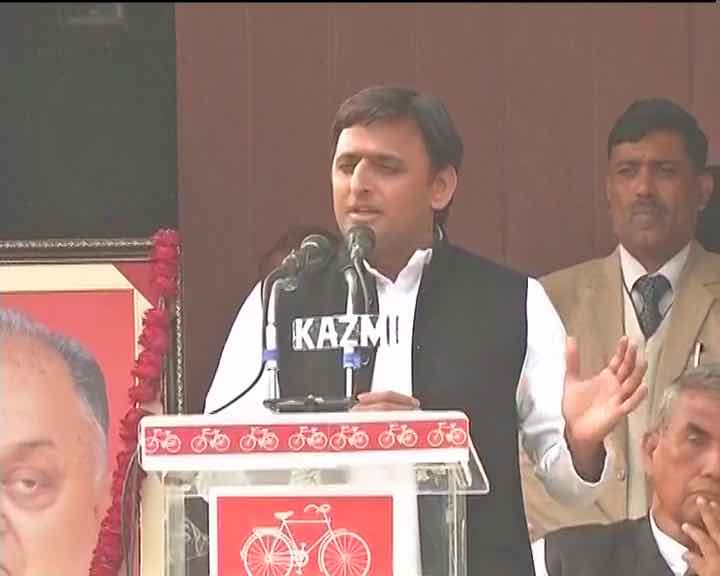 Uttar Pradesh Chief Minister Akhilesh Yadav on Sunday took a jibe at Prime Minister Narendra Modi as he urged voters to again elect him to power in assembly elections.

“Where are the ‘achche din’? Where is the promised ‘vikas’ development they promised?” he asked, referring to Modi’s famous phrases of the 2014 Lok Sabha election campaign.

“At times they distributed ‘jhaadu’ (broom), sometimes they organised yoga.”

And without taking the name of any rival party, he again alluded to the Bharatiya Janata Party by saying “they are again weaving dreams” and that they might announce sops in the upcoming annual budget.

Akhilesh Yadav, who has ousted his father and party founder Mulayam Singh Yadav as the party President, said his Samajwadi Party government had achieved a lot during the five years it was in power.

“We need to do more,” he said. “But we have done more than what we promised in our (last) election manifesto.”

He did not refer to the infighting in the Samajwadi Party but said he got a chance to become Chief Minister at a young age and “Netaji blessed us”.

“All the five years we ruled (Uttar Pradesh), we did not deviate from our socialist ideology,” he added to thunderous applause.

“We have done development work all the five years,” he said, and listed his achievements in rural electrification, road infrastructure and health care.