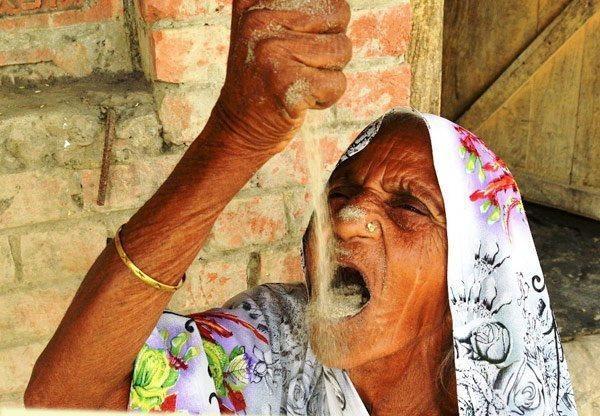 A woman from Varanasi district of Uttar Pradesh who is 78 year old eats 1 kilo sand every day since 63 years.

In an interview taken by Dainik Bhaskar group many unbelievable facts came in front of us, An old lady named Kusmawati never skips eating sand in her diet schedule as she has become addicted to it. She has been eating sand from the young age of 15 years to get rid of bloating, as doctor advised her to consume sand with milk to combat all sort of diseases.

After marriage, she stopped eating sand for few days. Because of embarrassment this old woman didn’t eat sand for three days but then she suffered from stomachache and no medication helped her to get well. So, people took her to the doctor and then told him about this weird habit of her. Kusmawati’s ultrasound reports indicated that she was completely fit and fine. Thus, her in-laws started feeding her sand every day. Whenever she doesn’t eat sand, she suffers from stomach ache and sleeplessness.

Kusmawati rinses sand in water and then let it to dry in the sunshine. Then, she consumes sand after filtering it with a strainer. Lady feels that the taste of sand is as sweet as sugar. She has never fallen sick due to consumption of sand till date. Kusmawati suffered from fever and stomachache but never got admitted in hospital.

This old woman believes that the secret of her health is consumption of sand. Besides sand, Kusmawati likes eating dals, vegetables, chapati, rice, tea, banana and apple. Kusmawati’s major source of energy is sand. Dr. DN Pande, head of the anesthesia department, BHU Varanasi, India explained, “This is a psychiatric disorder. The majority of people become victims of such habits to get rid of the disease. The digestive system of Kusmawati is normal due to which she doesn’t fall sick. Sand gets removed from her body through the stool. Many women eat clay vessels and hair. It is a disease. Kusmawati’s family must consult a reputed doctor.”