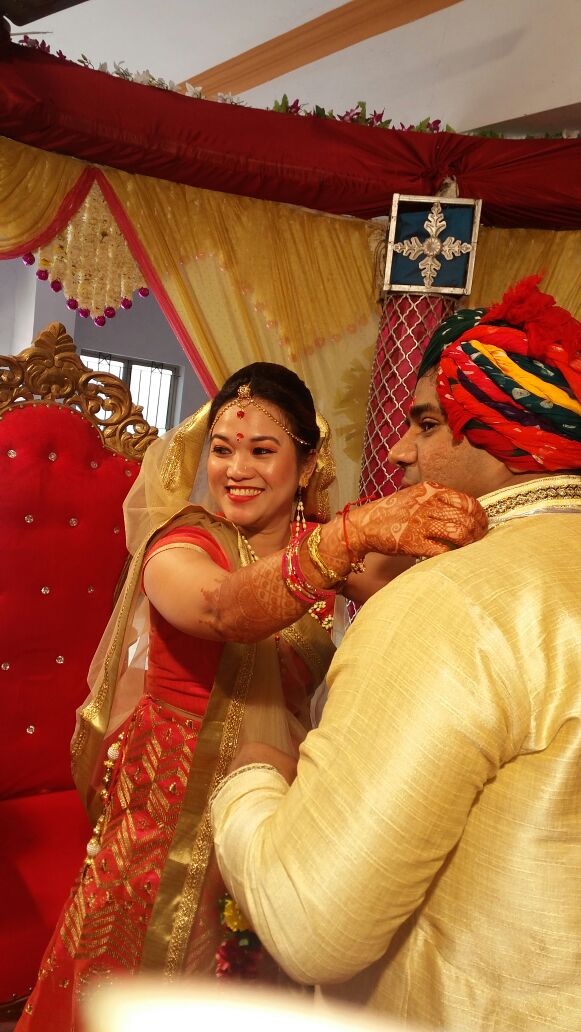 The love which starts on Valentine day a year ago in a Katar hotel between a Vadodara boy and Philippines girl blossoms and they get married on the eve of Valentine’s day. The girl was impressed with Gujarati language and the couple got married in Vadodara on Monday a day before her second love anniversary.

Jaimin Patel living in Govardhan Park in TP 13 Chhani area went to Qatar after completed his hotel management course seven years ago. He is working in a hotel in Qatar and his wife Christi from Philippines also work in the same hotel.

Jaimin said that they both became friends as they both are working in the same hotel. He said Christi is impressed with him as he is from Gujarat and day by day they became close to each other.

Two years ago on 14th February 2015 Jaimin proposed to Christi and asked her to marry which she accepted instantly. After two years a day before their second love anniversary both the love birds tied the knot in Vadodara.

Christi said that Jaimin is the only one working in the hotel whose nature touched her. Moreover he is a Gujarati which make me like him more. When Jaimin proposed her she accepted it instantly but was in delima if her parents accept their relationship. However Christi said her parents accepted and one month earlier they came to Baroda and fix the marriage with Jaimin’s parents. Now after two years their love story finally ended up in their marriage.

However Christi was little sad as her parents not attended her marriage due to operation of her father. But Darpan Kothari and Alpa Kothari don’t feel her alone here in Vadodara. 10 days ago Jaimin parents were in confusion after they get the news that Christi’s parents would not attend the marriage. But as the cards were distributed the marriage has to be organise on the same date.

In the meantime Jayanti Patel President of GSFC officers association talked to his good friend Darpan Kothari and he readily accept for ‘Kanyadaan’ of the bride. On the marriage day Darpan Kothari and his wife Alpa Kothari fulfilled their promise. Alpa said they feel privileged as according to Hindu Shastra ‘Kanyadaan’ is the most important daan in life.