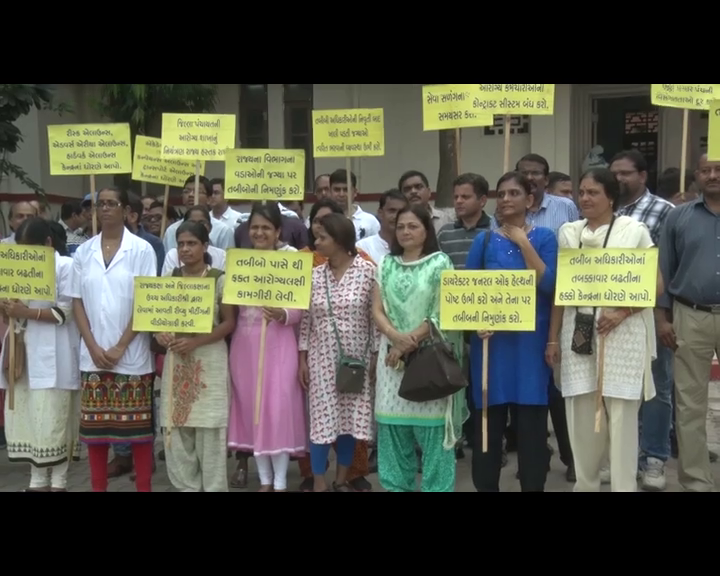 Gujarat In-service Doctor’s Association went on three day Mass CL from 11th to 13th September regarding their long pending demands. Doctors from Primary Health Centers, Public Health Centers and Government hospitals join the Mass CL. They also took out a rally inside the campus with placards of their demands.

The doctors said their various demands are pending and they approached many times before the Health and Family Welfare Department and government. But no action was taken from them. On 3rd March 2016 they took out a silent rally followed by collective protest at Gandhinagar on 9th June 2016. On 7th March this year they decide to go on Mass CL but after government assurance cancelled the programme. On 23rd August around 500 In service doctors protested and decide to go on three days Mass CL from 11th September regarding their demands.

Based on that the doctors went on Mass CL from 11th September Monday and aggressively put their stand before the government. They stand with placards of their demands and requested the government to look into it. They also organised a symbolic blood donation camp for their Mass CL inside the campus. The doctors are ready to fight for their demands.

“The doctors demand Entry Pay, NPA, Specialist Cadre, Dynamic Assured Career Progression, Director Cadre Pay, State level Director General Post, Allowance as per center norms and many others. As tthe government is not turning its attention to us we decide to go for three days Mass CL starting from today. We are ready to fight as government might pressurised us of ESMA but we are ready for mass resignation also if our demands were not met,” said Dr. Uday Dindawat President GIDA.